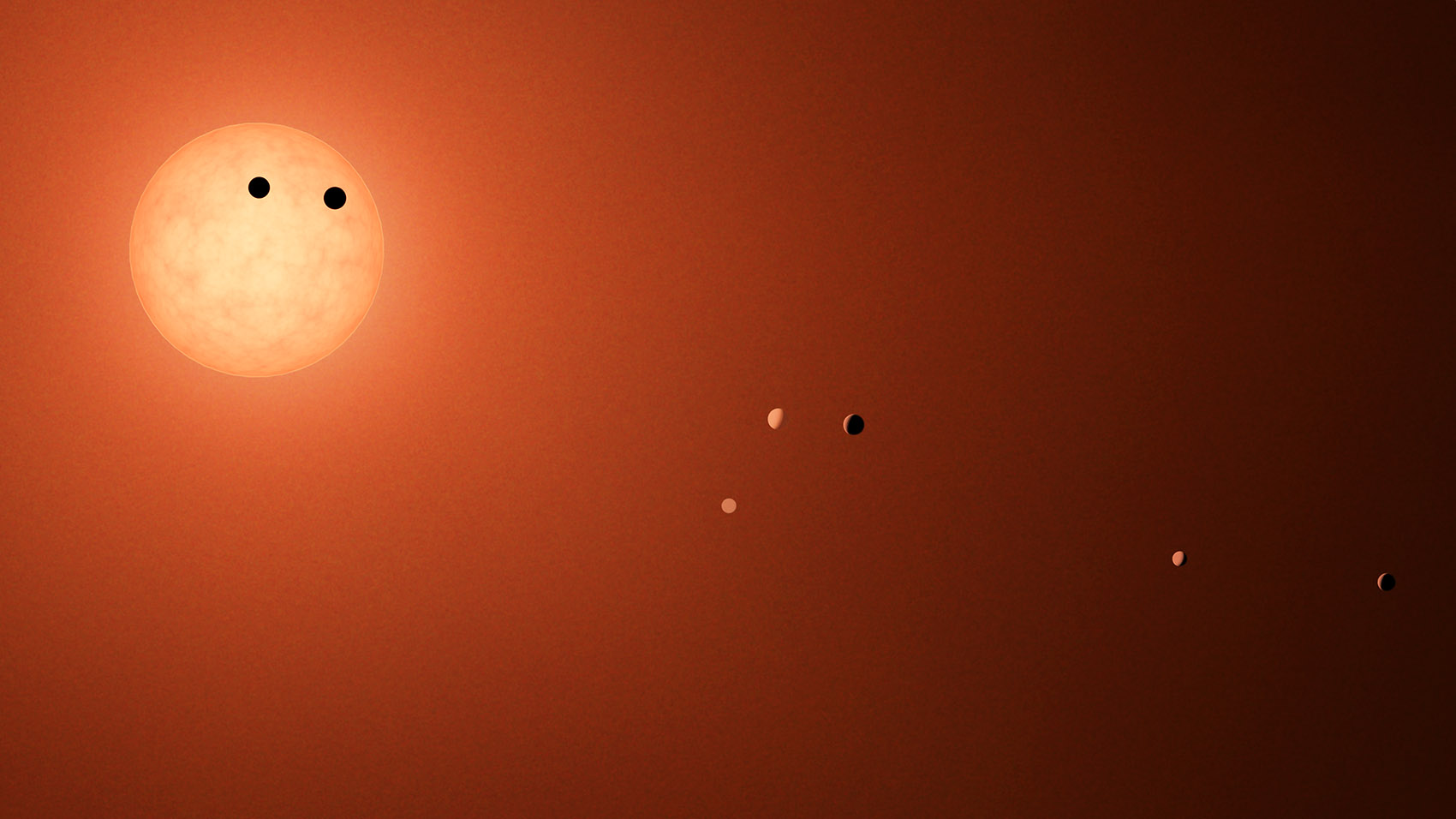 NASA's Spitzer Space Telescope has revealed the first known system of seven Earth-size planets around a single star. Three of these planets are firmly located in the habitable zone, the area around the parent star where a rocky planet is most likely to have liquid water. The discovery sets a new record for greatest number of habitable-zone planets found around a single star outside our solar system.

“This discovery could be a significant piece in the puzzle of finding habitable environments, places that are conducive to life,” said Thomas Zurbuchen, associate administrator of the agency’s Science Mission Directorate in Washington. “Answering the question ‘are we alone’ is a top science priority and finding so many planets like these for the first time in the habitable zone is a remarkable step forward toward that goal.”

This exoplanet system is called TRAPPIST-1, named for The Transiting Planets and Planetesimals Small Telescope (TRAPPIST) in Chile. In May 2016, researchers using TRAPPIST announced they had discovered three planets in the system. Assisted by several ground-based telescopes, including the European Southern Observatory's Very Large Telescope, Spitzer confirmed the existence of two of these planets and discovered five additional ones, increasing the number of known planets in the system to seven.

IPAC scientists Sean Carey and Jim Ingalls were part of the science team which used Spitzer to study the system around TRAPPIST-1(2MASS J23062928-0502285), a well-characterized, isolated M-dwarf star only 12 pc away.  Analysis of over 300 light curves at 4.5 micron from Spitzer’s IRAC instrument captured the planets transiting TRAPPIST-1, and allowed the team to precisely measure the sizes of the seven planets, and estimate the masses of six.

Spitzer did not always have the capability to carry out exoplanet observations with such precision.  A 2011 effort led by IPAC scientists Jim Ingalls and Jessica Krick, together with spacecraft engineers at Lockheed Martin Space Systems, three innovations -- modified heater cycling, repurposed peak-up camera for staring observations, and in-depth characterization of individual pixels in the camera -- more than doubled Spitzer's stability, enabling photometry at remarkable precision.  [See: http://www.spitzer.caltech.edu/news/1560-feature13-07-How-Engineers-Revamped-Spitzer-to-Probe-Exoplanets]

“Spitzer is a real survivor,” said Sean Carey, manager of NASA's Spitzer Science Center. “Initially designed for a 5-year mission, it has delivered high quality data and transformative science for 14 years now. Its extended life has offered room to imagine and enable new capabilities.  With TRAPPIST-1 we see how this really pays off. This is the most exciting result I have seen from the Spitzer mission. Future planned Spitzer observations of the system are sure to reveal more secrets."

The Spitzer Science Center is part of IPAC at Caltech.

IPAC’s Communications and Education team developed graphics and multimedia presented at the NASA’s press conference, including the visualization of the TRAPPIST-1 system featured on the cover of the journal Nature.