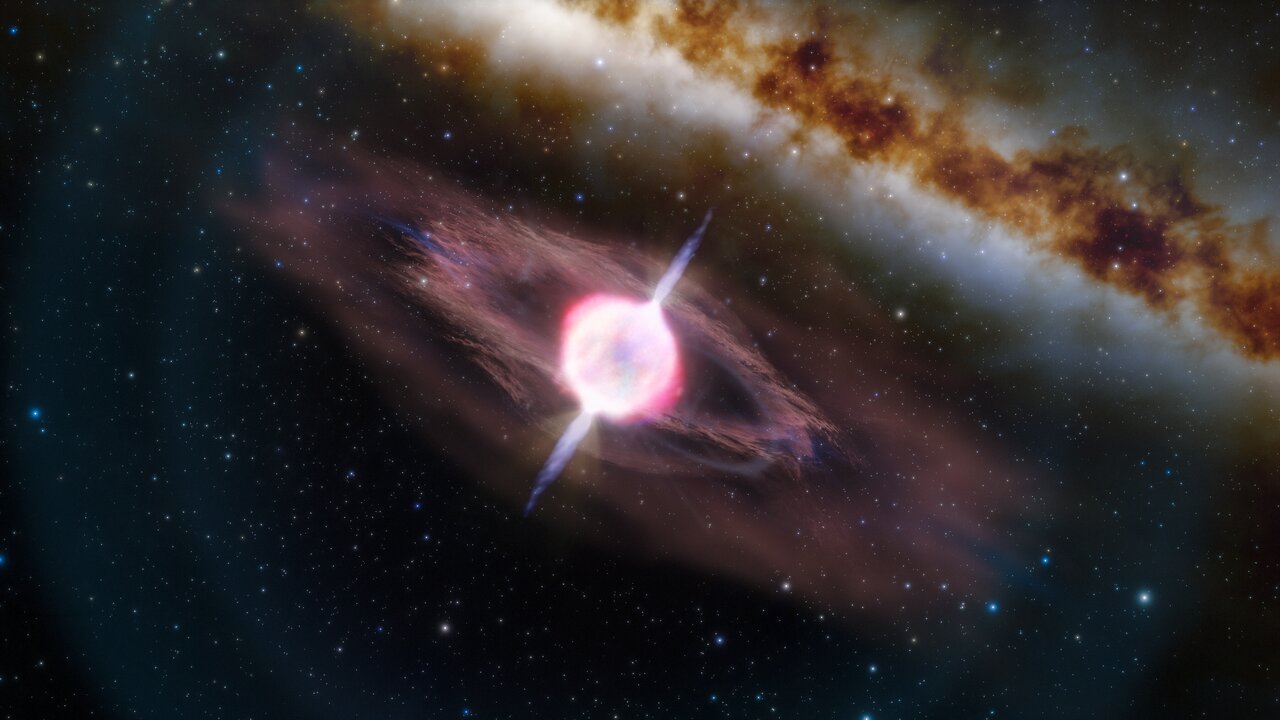 On Aug. 26, 2020, NASA’s Fermi Gamma-ray Space Telescope detected a pulse of high-energy radiation that had been racing toward Earth for nearly half the present age of the universe. Lasting only about a second, it turned out to be one for the record books – the shortest gamma-ray burst (GRB) caused by the death of a massive star ever seen.

GRBs are the most powerful events in the universe, detectable across billions of light-years. Astronomers classify them as long or short based on whether the event lasts for more or less than two seconds. They observe long bursts in association with the demise of massive stars, while short bursts have been linked to a different scenario.

“We already knew some GRBs from massive stars could register as short GRBs, but we thought this was due to instrumental limitations,” said Bin-bin Zhang at Nanjing University in China and the University of Nevada, Las Vegas. “This burst is special because it is definitely a short-duration GRB, but its other properties point to its origin from a collapsing star. Now we know dying stars can produce short bursts, too.”

Named GRB 200826A, after the date it occurred, the burst is the subject of two papers published in Nature Astronomy on Monday, July 26. The first, led by Zhang, explores the gamma-ray data. The second, led by Tomás Ahumada, a doctoral student at the University of Maryland, College Park and NASA’s Goddard Space Flight Center in Greenbelt, Maryland, describes the GRB’s fading multiwavelength afterglow and the emerging light of the supernova explosion that followed.

“We think this event was effectively a fizzle, one that was close to not happening at all,” Ahumada said. “Even so, the burst emitted 14 million times the energy released by the entire Milky Way galaxy over the same amount of time, making it one of the most energetic short-duration GRBs ever seen.”

When a star much more massive than the Sun runs out of fuel, its core suddenly collapses and forms a black hole. As matter swirls toward the black hole, some of it escapes in the form of two powerful jets that rush outward at almost the speed of light in opposite directions. Astronomers only detect a GRB when one of these jets happens to point almost directly toward Earth.

Each jet drills through the star, producing a pulse of gamma rays – the highest-energy form of light – that can last up to minutes. Following the burst, the disrupted star then rapidly expands as a supernova.

Short GRBs, on the other hand, form when pairs of compact objects – such as neutron stars, which also form during stellar collapse – spiral inward over billions of years and collide. Fermi observations recently helped show that, in nearby galaxies, giant flares from isolated, supermagnetized neutron stars also masquerade as short GRBs.

GRB 200826A was a sharp blast of high-energy emission lasting just 0.65 second. After traveling for eons through the expanding universe, the signal had stretched out to about one second long when it was detected by Fermi’s Gamma-ray Burst Monitor. The event also appeared in instruments aboard NASA’s Wind mission, which orbits a point between Earth and the Sun located about 930,000 miles (1.5 million kilometers) away, and Mars Odyssey, which has been orbiting the Red Planet since 2001. ESA’s (the European Space Agency’s) INTEGRAL satellite observed the blast as well.

All of these missions participate in a GRB-locating system called the InterPlanetary Network (IPN), for which the Fermi project provides all U.S. funding. Because the burst reaches each detector at slightly different times, any pair of them can be used to help narrow down where in the sky it occurred. About 17 hours after the GRB, the IPN narrowed its location to a relatively small patch of the sky in the constellation Andromeda.

Using the National Science Foundation-funded Zwicky Transient Facility (ZTF) at Palomar Observatory, the team scanned the sky for changes in visible light that could be linked to the GRB’s fading afterglow.

“Conducting this search is akin to trying to find a needle in a haystack, but the IPN helps shrink the haystack,” said Shreya Anand, a graduate student at Caltech and a co-author on the afterglow paper. “Out of more than 28,000 ZTF alerts the first night, only one met all of our search criteria and also appeared within the sky region defined by the IPN.”

Within a day of the burst, NASA’s Neil Gehrels Swift Observatory discovered fading X-ray emission from this same location. A couple of days later, variable radio emission was detected by the National Radio Astronomy Observatory’s Karl Jansky Very Large Array in New Mexico. The team then began observing the afterglow with a variety of ground-based facilities.

Observing the faint galaxy associated with the burst using the Gran Telescopio Canarias, a 10.4-meter telescope at the Roque de los Muchachos Observatory on La Palma in Spain’s Canary Islands, the team showed that its light takes 6.6 billion years to reach us. That’s 48% of the universe’s current age of 13.8 billion years.

But to prove this short burst came from a collapsing star, the researchers also needed to catch the emerging supernova.

“If the burst was caused by a collapsing star, then once the afterglow fades away it should brighten again because of the underlying supernova explosion,” said Leo Singer, a Goddard astrophysicist and Ahumada’s research advisor. “But at these distances, you need a very big and very sensitive telescope to pick out the pinpoint of light from the supernova from the background glare of its host galaxy.”

To conduct the search, Singer was granted time on the 8.1-meter Gemini North telescope in Hawaii and the use of a sensitive instrument called the Gemini Multi-Object Spectrograph. The astronomers imaged the host galaxy in red and infrared light starting 28 days after the burst, repeating the search 45 and 80 days after the event. They detected a near-infrared source – the supernova – in the first set of observations that could not be seen in later ones.

The researchers suspect that this burst was powered by jets that barely emerged from the star before they shut down, instead of the more typical case where long-lasting jets break out of the star and travel considerable distances from it. If the black hole had fired off weaker jets, or if the star was much larger when it began its collapse, there might not have been a GRB at all.

The discovery helps resolve a long-standing puzzle. While long GRBs must be coupled to supernovae, astronomers detect far greater numbers of supernovae than they do long GRBs. This discrepancy persists even after accounting for the fact that GRB jets must tip nearly into our line of sight for astronomers to detect them at all.

The researchers conclude that collapsing stars producing short GRBs must be marginal cases whose light-speed jets teeter on the brink of success or failure, a conclusion consistent with the notion that most massive stars die without producing jets and GRBs at all. More broadly, this result clearly demonstrates that a burst’s duration alone does not uniquely indicate its origin.

The Fermi Gamma-ray Space Telescope is an astrophysics and particle physics partnership managed by NASA's Goddard Space Flight Center in Greenbelt, Maryland. Fermi was developed in collaboration with the U.S. Department of Energy, with important contributions from academic institutions and partners in France, Germany, Italy, Japan, Sweden, and the United States.

Discovery and Confirmation of the Shortest Gamma Ray Burst from a Collapsar, Nature Astronomy, July 2021

Date: July 26th, 2021
Category: Project News
Image Link: noirlab2121a.jpeg
Image Caption
This illustration depicts a collapsing star that is producing two short gamma-ray jets. Just before a massive, collapsing star explodes as a supernova, we often observe a gamma-ray burst (a brief explosion of gamma-ray radiation) if the jets are pointed toward Earth. Most known supernova-produced gamma-ray bursts are “long” (lasting more than two seconds), but one called GRB 200826 was “short” (lasting just 0.6 second). Astronomers think this, and possibly other short supernova-produced gamma-ray bursts, appeared short because the jets of gamma rays aren’t strong enough to completely escape the star. This would produce jets that are shorter in both length and duration. Credit: International Gemini Observatory/NOIRLab/NSF/AURA/J. da Silva