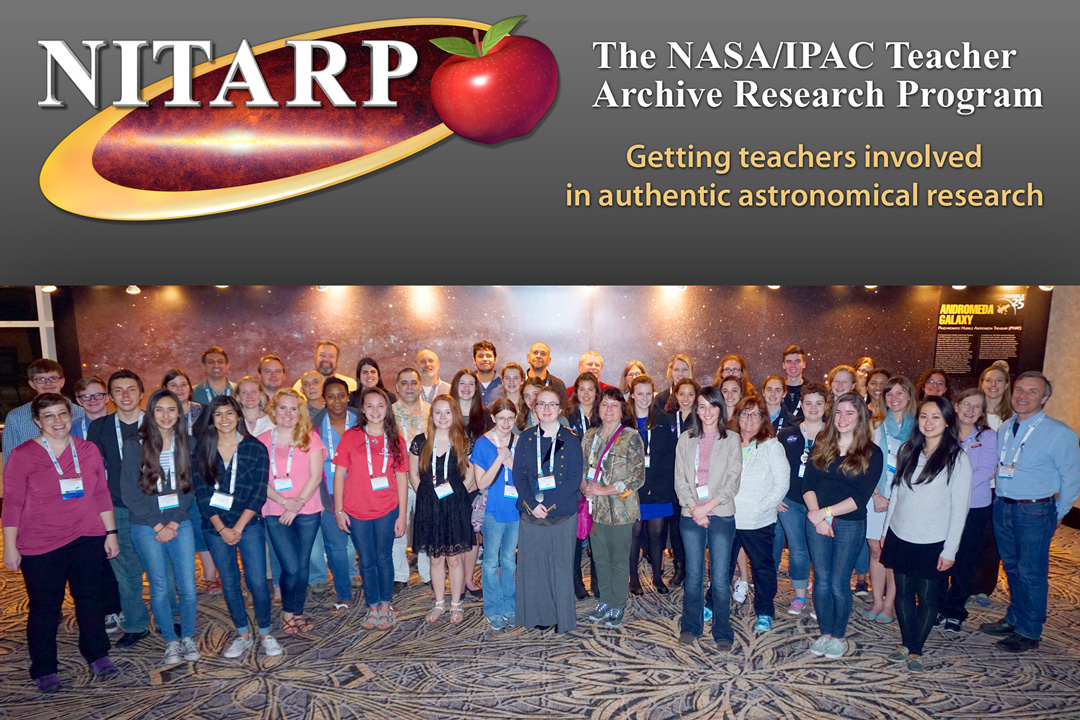 Look around at this year's winter meeting of the American Astronomical Society (AAS) in Kissimmee, Florida and you're bound to run into a past, present or future participant in the NASA/IPAC Teacher Archive Research Program (NITARP). For more than a decade now, the program has paired educators and their students with astronomer mentors to conduct original, year-long, group research projects using genuine astronomical data.

Nine NITARP alumni educators, some of their current students, and a student alumna have all returned this year to AAS, paying their own way to attend the international conference. These NITARP alumni are joining the 26 teachers and students from the 2015 class along with the eight teachers for the new 2016 class, making for a huge NITARP contingent at the AAS meeting.

"I think it's amazing how many of the folks who have gone through NITARP stay involved with the program and keep coming back to participate in the AAS conference," said Luisa Rebull, an associate research scientist from NASA's Infrared Processing and Analysis Center (IPAC) at the California Institute of Technology (Caltech) in Pasadena, who coordinates the NITARP program. "It really demonstrates that NITARP has a huge impact on our participants' career outlooks and professional interests."

Here are the NITARP alumni attending the 2016 winter AAS, in alphabetical order:

NITARP covers the travel costs and registration fees to the winter AAS conference for the incoming and the outgoing class's teachers, the latter of which may also bring up to two students with them whose costs are likewise covered. Alumni, however, must raise their own money to attend the AAS. The educators who participate in NITARP incorporate the experience into their classrooms and share their experience with other teachers, promoting science education all over the country.

For Holly Bensel, this will be her fourth AAS meeting and her third bringing students along. "I love to go to the meetings," Bensel said. "It energizes me and reinforces why it is important to prepare students to prepare for a career in science and engineering." She and her students will present a poster on setting a baseline for monitoring future changes in light pollution in the Willamette Valley, wherein higher levels of artificial lighting at night make stars progressively more difficult to see. Bensel said that the NITARP experience increased her confidence more than years of teaching did. She has seen her students grow more confident in the conference's professional environment as well. "My students would like to come back to the conference every year if they could afford it," Bensel said. "I wish there were more opportunities like this."

John Blackwell—a dyed-in-the-wool astronomy enthusiast since age nine—has gone to AAS meetings as a member for some 12 years now. He also serves as the Director of the Grainger Observatory at the Phillips Exeter Academy, where he conducts his own research. More familiar with the science side of the science education equation, Blackwell said that NITARP has exposed him to new pedagogical formats and how other educators work with their students. The rigorous, project-based science that NITARP affords its participants has resonated with Blackwell and his NITARP fellows. "As a teacher, the NITARP experience has shown me and others that research-based education is here to stay, it works and is accessible," Blackwell said.

Like Blackwell, Chelen Johnson is a long-time veteran of AAS, this being her ninth consecutive meeting at which she is presenting a poster with her students, nicknamed Team Astro. The six girls on the team have met on Saturday mornings to analyze open star cluster data and tele-collaborate with students at Carmel Catholic High School in Mundelein, Illinois, using email and Google Hangouts. "It's been a great experience for them," said Johnson. Her initial participation with NITARP nine years ago set the wheels in motion for doing research-based education. "It's overwhelming the influence that NITARP has had on my teaching career," said Johnson. "Not only has it convinced me that authentic research is the way to work with students of all levels, but NITARP has opened so many other doors for me." Those doors have included the cabin doors on NASA's SOFIA airplane, an airborne observatory, which Johnson has flown on twice as both an educator and as a co-principal investigator on a research project.

Many NITARP alumni similarly find themselves working in part or full-time outside of the classroom. In Kate Meredith's case, she is the new Director of Education Outreach at Yerkes Observatory. She will present a poster and give a talk this year at AAS. Meredith has continued to hear from the students she involved in her 2011 NITARP experience. "It made such an impression on my students that they still thank me for it to this day. NITARP made quite an impression on Meredith, too, for that matter. "NITARP is one in a string of research-based experiences for teachers that I have participated in," she said. "This one is the best."

Danielle Miller likewise has taken a lot away from her NITARP experience that was steeped in genuine astronomical research. "NITARP made me realize how different real science is from what we teach our students," Miller said. "Since I participated, I'm always critical of my lessons and ask myself: 'Is this real-life science or is this just a bunch of facts?', and I think it guides me in the right direction." To wit, the two students who attended the AAS meeting last winter with Miller are now studying STEM (Science, Technology, Engineering and Mathematics)-related fields in college, which Miller credits in part to NITARP.

STEM education is the mission for NITARP alumnus Tim Spuck as the STEM Education Development Officer for Associated Universities Inc., which manages the National Radio Astronomy Observatory (NRAO). Spuck participated in the inaugural NITARP class in 2005, before the program was even called NITARP, and has worked with the enterprise ever since. "NITARP made me a better teacher and a better astronomy education professional," Spuck said. "The program helps teachers and students learn by doing science!" Among the latest evidence of NITARP's positive influence on Spuck? The book Einstein Fellows: Best Practices in STEM Education, for which he was lead editor and authored a chapter, was just selected by its publisher, Peter Lang Publishing, as the 2014 Book of the Year.

Coming full circle, Miranda Heller—who as an undergraduate studying secondary Earth and space education worked with Spuck and NITARP in 2011—is herself attending AAS this year to network and job search. Heller has found AAS to be a fruitful and enriching professional endeavor. She first attended a post-NITARP AAS meeting in 2014, which led to her becoming a Skynet Junior Scholars leader with NRAO. Heller has experienced first-hand how much of an impact that getting to attend AAS can have on both NITARP teachers and their students. "Every student and teacher was proud to show off their hard work to the other teams and AAS attendees," Heller said. "There was definitely a tremendous amount of accomplishment felt by all." Heller added: "I want to give students that level of accomplishment through science education. Even if they don't pursue a degree in science, I want to show them how hard work and collaboration can be powerful—like the NITARP program taught me!"

The Infrared Processing and Analysis Center (IPAC), based at Caltech, in Pasadena, CA, is leading this program. These teams use archival data from the Spitzer Space Telescope (part of the Spitzer Heritage Archive, SHA), the NASA/IPAC Extragalactic Database (NED), the NASA Exoplanet Archive, the NASA/IPAC Infrared Science Archive (IRSA), all of which are based at IPAC, and other NASA archive holdings. Funding comes from the NASA Astrophysics Data Program.