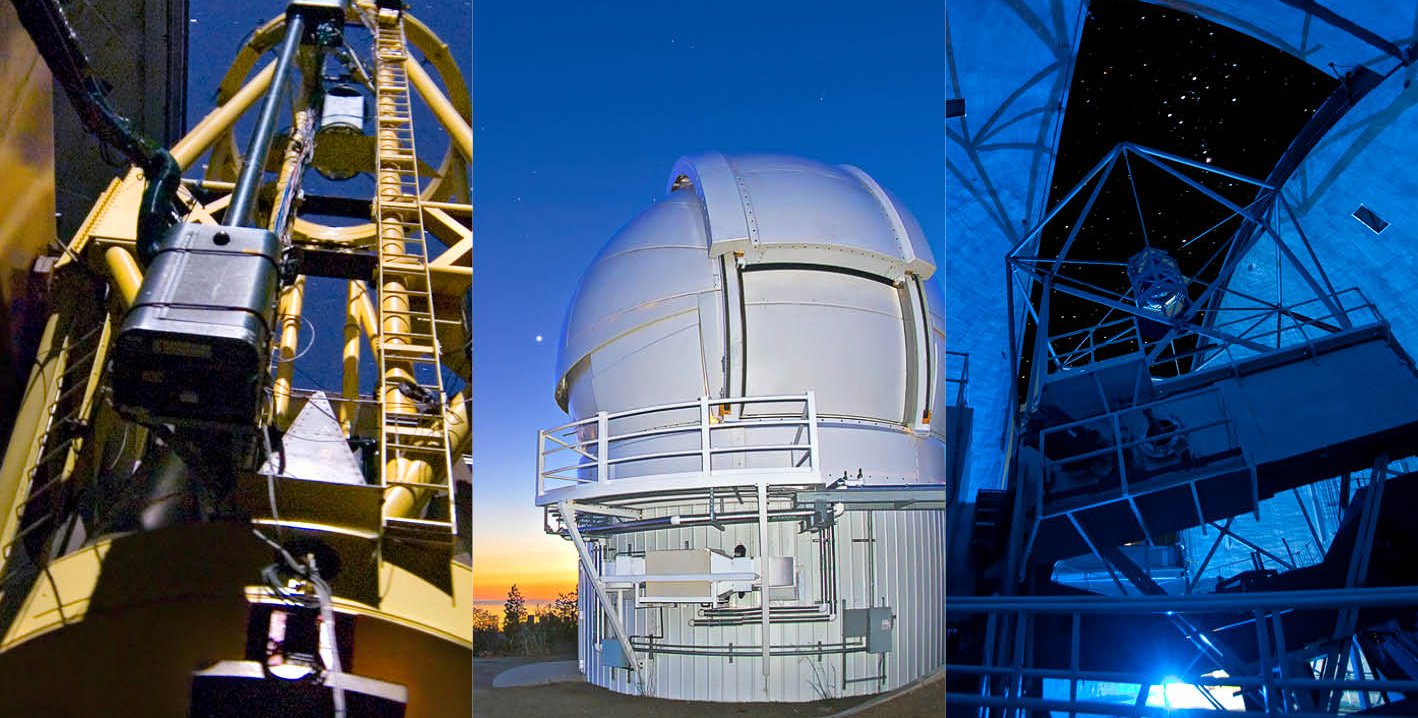 In the neighborhood that makes up our solar system, the giant planets—Jupiter and Saturn—reside in the chilly outer regions, while smaller planets tend to orbit closer to the sun. Our planet Earth lives in an intermediate tropical zone well-suited to life. Planet hunters have long wondered: Is this same type of planetary configuration common around other stars throughout our galaxy or are we unique?

The best way to find out is to do a census of the planetary denizens of the galaxy. Astronomers began such a census, called the California Legacy Survey, over three decades ago, and are now releasing a new batch of results. One pattern to emerge from the data is that giant planets tend to reside about 1 to 10 astronomical units (AU) from their host stars, a mostly icy region located beyond the temperate zone of a star. An AU is defined as the distance from Earth to our sun, or about 93 million miles. 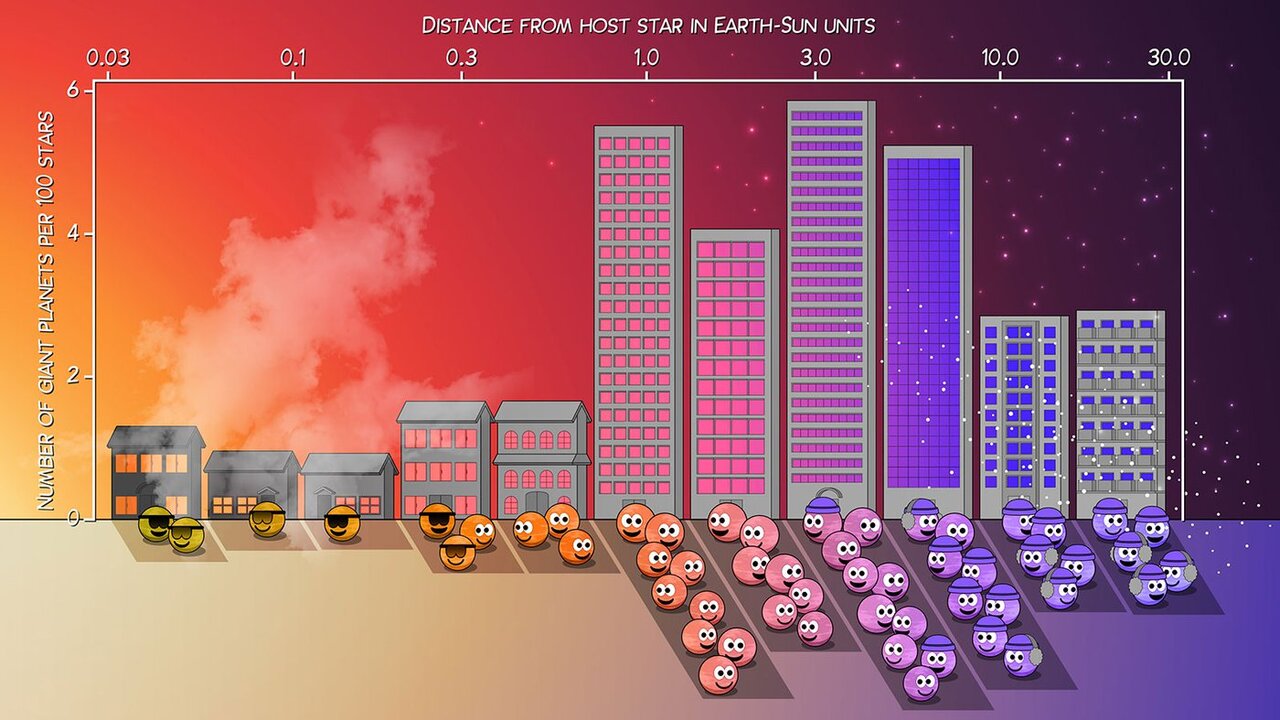 This Illustration shows where giant planets reside with respect to their host stars. Recent findings from the California Legacy Survey, in which hundreds of stars and planets were surveyed, reveal that giant planets around other stars tend to orbit between 1 and 10 astronomical units (AU) from their stars. An AU is the distance between Earth and the sun. The results are depicted in this chart, such that the taller buildings show where most of the giant planets tend to "live" relative to their stars, i.e., in the zone between 1 and 10 AU from their stars. Giant planets residing very close to their stars, colloquially known as "hot Jupiters," receive an abundance of light and heat from their nearby host stars, and are thus adorned in sunglasses. More distant giants receive much less light from their host stars and therefore are colder and depicted with hats and earmuffs.
Credit: California Legacy Survey/T. Pyle (Caltech/IPAC)

This is similar to what we see in our own solar system: Earth orbits at 1 AU, Jupiter is situated at about 5 AU, and Saturn at 9 AU. 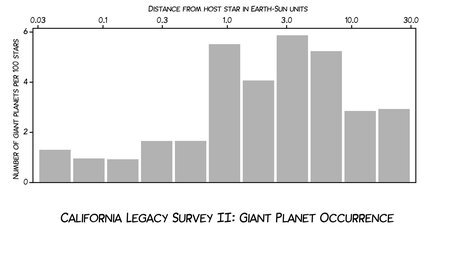 This graph of data collected by the California Legacy Survey indicates that most giant planets in the galaxy tend to reside about 1 to 10 astronomical units (AU) from their host stars. An AU is defined as the distance from Earth to our sun, or about 93 million miles. This is similar to what we see in our own solar system: Earth orbits at 1 AU; Jupiter is situated at about 5 AU and Saturn at 9 AU.
Credit: California Legacy Survey/T. Pyle (Caltech/IPAC)

In our solar system, we also have planets that are a bit smaller than Jupiter and Saturn, Uranus and Neptune, which are located out beyond Saturn. The California Legacy Survey is not sensitive to planets in that size range and at that distance.

"While we can't detect smaller planets similar to Neptune and Uranus that are very distant from their stars, we can infer that the large gas giants like Jupiter and Saturn are extremely rare in the outermost regions of most exoplanetary systems," explains BJ Fulton, a staff scientist at Caltech's IPAC astronomy center.

The new research is reported in two journal articles accepted for publication in The Astrophysical Journal Supplement. Lee Rosenthal (MS '18), a graduate student who works with Howard, is lead author of one study, and Fulton is lead author of the second paper.

In the early days of planet hunting, back in the late 1990s and early 2000s, it was not clear whether planets that orbit other stars, called exoplanets, were lined up in a similar fashion to our solar system, with small rocky planets in the interior and giant planets in the outer regions, or if the opposite were true. In fact, evidence began to accumulate that exoplanets did not share our same architecture as more and more giant, blistering planets, known as "hot Jupiters," were discovered orbiting very close to their stars.

"The hot Jupiters were easy pickings back then," says Rosenthal, "but those early surveys were biased and didn't get the full picture." Because hot Jupiters whip tightly around their stars, and because they are massive, they can be easily detected using the radial velocity planet-hunting method, in which the "wobble" of a star is detected as a planet circles around and tugs on the star, pulling it back and forth.

To obtain a more complete picture of other star systems, astronomers needed more time. The outer planets take much longer journeys around their stars; just one tug on a star can last decades. For reference, Jupiter laps our sun every 12 years, while Saturn ambles along at an even slower pace and completes one orbit every 29 years.

That is where the California Legacy Survey comes in. It has been observing 719 sun-like stars for more than three decades, and is the longest-duration exoplanet survey to date. The project, which also involves researchers at other institutions, including University of California and University of Hawaiʻi, primarily uses three telescopes: The W. M. Keck Observatory on Maunakea in Hawaiʻi, and the Shane and Automated Planet Finder telescopes, both at Lick Observatory, near San Jose, California. Among the stars searched in the project, 177 planets were found, including 14 that were newly discovered. The planets have masses between one-hundredth and 20 times the mass of Jupiter (or between about 3 and 6,000 Earth masses). As of now, ground-based telescopes are not sensitive enough to detect planets the mass of Earth or smaller.

Rosenthal explains that the survey was designed to be unbiased by carefully selecting random stars, "as ifyou could put your hand in a grab bag of stars and pull a random planet out." Working on this project as part of his PhD thesis, Rosenthal says it was "humbling to work on a 30-year project where some of the data are older than I am."

Fulton says that the survey works a bit like a demographic census, in which pollsters study a wide range of people. "The idea is to survey planets of all sizes and temperatures and then to look for patterns in the data," he says. Both Fulton and Rosenthal spent months developing software, which they call a data pipeline, to search for planets in the telescope data.

One pattern to emerge is the tendency for giant planets to reside between 1 and 10 AU from their star. While the team's data does not fully cover regions beyond 10 AU, because those planets require even more than three decades to complete an orbit, they say that they can make inferences based on the partial orbits observed thus far.

The team plans to continue to search their census data for new patterns and clues to help understand the characteristics and formation of other star systems, as well as our own solar system. They are also looking forward to next-generation surveys.

"This survey is a great jumping-off point for future instruments that are sensitive to planets the size of Earth," says Howard, who is leading one such instrument, the Keck Planet Finder, expected to be shipped to Keck in 2022. 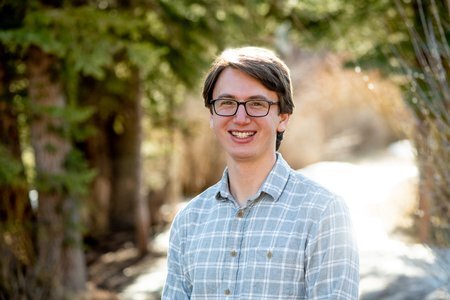 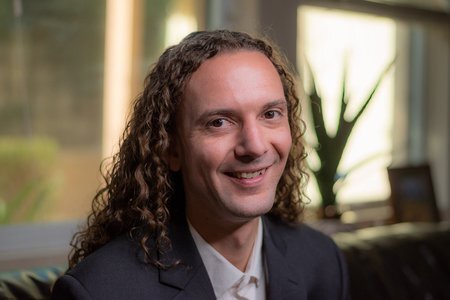 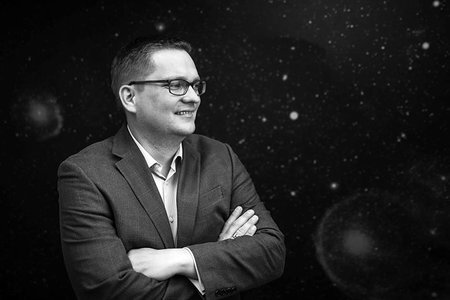