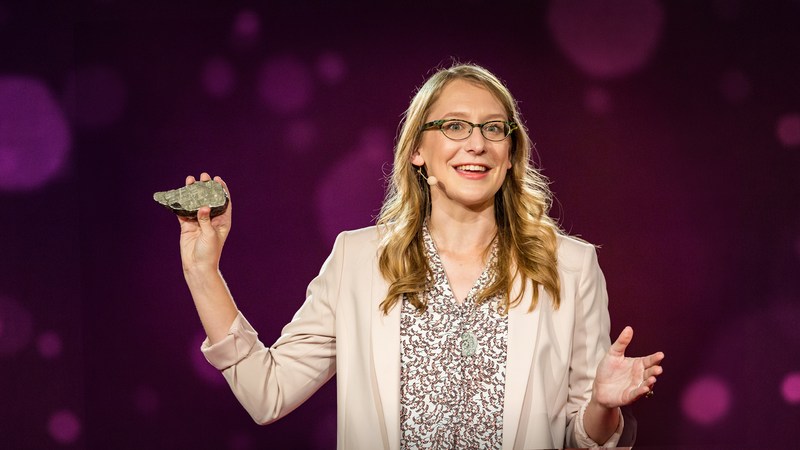 We must keep searching the sky!

Last month, IPAC scientist and TED Fellow Carrie Nugent published her first book entitled “Asteroid Hunters”, part of the TED book series. An asteroid hunter herself, Carrie is dedicating her scientific career to mapping the near-Earth space – the space where  near-Earth asteroids orbit -  and building a record of our oldest and most numerous cosmic neighbors. Since she joined IPAC in 2015, Carrie has been part of a team of scientists who use data from NASA’s NEOWISE mission to discover and characterize near-Earth asteroids. We sat with Carrie to talk about her new book, her work and why “we must keep searching the sky”.

When was the idea about the book born and what was your main motivation to embark on this project?

I enjoy telling people about asteroids. Everything started when I applied to the TED Fellows program in the summer of 2015. I threw my name in and they liked me so I went to the TED conference in 2016. I gave a short talk about asteroids and then they invited me to expand on my talk through TED book series.

How long did it take to write the book?

I was writing weekends and early mornings for months to get to the first draft. I had a great editor, and we went through several revisions, which took another few months. It was certainly time consuming but very enjoyable as well. The asteroid-hunting community is very interesting, and it was a privilege to be able to tell some of their stories.

Did you discover asteroids or did asteroids discovered you?

Haha, I think I just fell into it. There are not a lot of people who start their life saying they want to study asteroids (though some do!). I was good at physics and math and I had good knowledge of geology so I was a good fit for this type of work. As an undergraduate student, I majored in physics but I started studying asteroids in graduate school at UCLA.

What is your research focused on?

I use infrared data from NEOWISE to find ways to deduce asteroid composition. Basically, I look at how asteroids heat up or cool down to see what they are made out of. For example, a metal asteroid will heat and cool much faster than a rocky asteroid. I do some theoretical thermal modeling and then compare that to the data. I am happy to be part of a team of scientists at IPAC who work hard to ingest, process, and archive NEOWISE data, which is made available to the global scientific community.  IPAC is a great place for asteroid discoveries with great resources in terms of data and expertise.

The subject of asteroids receives a great deal of attention because of the small possibility that one can hit the Earth and cause serious damage. But what it is that gets scientists like you excited about asteroids? What are the interesting and important questions that the scientific community seeks answers to?

Asteroids are made of are some of the oldest material in our solar system. They formed way before planets did. In that sense, asteroids can tell us about what the early solar system was like. Studying asteroids is like looking back in time.

What does it take to discover asteroids and measure their orbits?

To discover asteroids and measure their orbits we need to observe them over a sufficient period of time, usually several days. Observations from one location could be sufficient but in cases where the asteroid cannot be seen at all times, it’s very useful to have telescopes at various locations all over the Earth and out in space.

What are the current challenges that the community of asteroid hunters faces?

I think the biggest challenge for the community right now is to find 90% of the potentially hazardous asteroids.

What kind of discovery could bring asteroids to the front pages  of newspapers?

Well, the thing I would like to see is what I just talked about - discovering all of the potentially hazardous asteroids. I think it is an important and solvable problem. Although in popular culture asteroids are metaphors for our lack of control, the fact is that an asteroid impact is a preventable natural disaster. We have the technology to actually move an asteroid out of Earth’s way if we have enough warning time.

What will it take to fully map the near-Earth space?

The continuation of current programs, and support for the development of new telescopes.

Do you plan to write another book?

You also run the Spacepod podcast, where every week you interview other scientists about their work.  What keeps you motivated to communicate science to the public in different ways?

The podcast is purely enjoyable for me. I like to ask my colleagues questions and it is rewarding to get feedback from listeners all across the world. I just received an email from someone who said that Spacepod makes their daily commute better. Podcasting is a great way to reach people living in areas where there aren’t a lot of astronomers, places where they can’t easily attend a public lecture or star party.

What do you think is needed to get more scientists engaged in communicating science to the public?

Almost every scientist I know volunteers significant amounts of personal time to communicate to the public, and I think that is wonderful. It’s unpaid work, but they choose to do it because they think talking about science is important.

As a partner in NASA's NEOWISE mission, IPAC is responsible for ingestion and processing of raw data, production of final data products, and archiving mission science and engineering data. IPAC is also responsible for the distribution of WISE data to the community through NASA/IPAC Infrared Science Archive (IRSA). The IPAC Communications & Education team also supports public affairs and public outreach by preparing mission images for public release into the image gallery.

Adventures of an asteroid hunter - TED Talk by Carrie Nugent

Asteroid Hunters is available at Amazon, Barnes & Noble, IndieBound, and in iBook, and audiobook versions.

Caltech Asteroid Hunter to give a TED talk