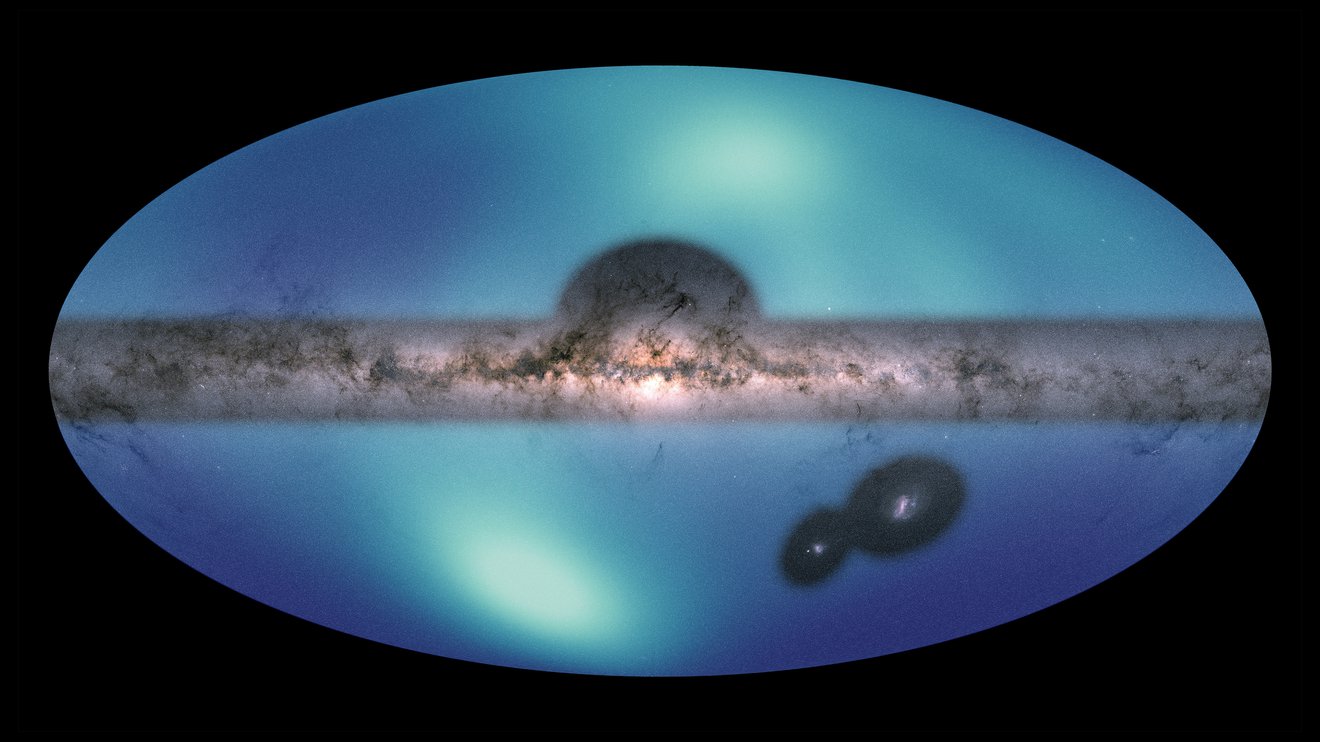 Astronomers using data from NASA and ESA (European Space Agency) telescopes have released a new all-sky map of the outermost region of our galaxy. Known as the galactic halo, this area lies outside the swirling spiral arms that form the Milky Way’s recognizable central disk and is sparsely populated with stars. Though the halo may appear mostly empty, it is also predicted to contain a massive reservoir of dark matter, a mysterious and invisible substance thought to make up the bulk of all the mass in the universe.

The data for the new map comes from ESA’s Gaia mission and NASA’s Near Earth Object Wide Field Infrared Survey Explorer, or NEOWISE, which operated from 2009 to 2013 under the moniker WISE. The study makes use of data collected by the spacecraft between 2009 and 2018.

The new map reveals how a small galaxy called the Large Magellanic Cloud (LMC) – so named because it is the larger of two dwarf galaxies orbiting the Milky Way – has sailed through the Milky Way’s galactic halo like a ship through water, its gravity creating a wake in the stars behind it. The LMC is located about 160,000 light-years from Earth and is less than one-quarter the mass of the Milky Way.

A simulation of dark matter surrounding the Milky Way galaxy (small ring at center) and the Large Magellanic Cloud (LMC) reveals two areas of high density: the smaller of the two light blue areas is a wake created by the LMC’s motion through this region. The larger corresponds to an excess of stars in the Milky Way’s northern hemisphere. Credit: NASA/JPL-Caltech/NSF/R. Hurt/N. Garavito-Camargo & G. Besla

Though the inner portions of the halo have been mapped with a high level of accuracy, this is the first map to provide a similar picture of the halo’s outer regions, where the wake is found – about 200,000 light-years to 325,000 light-years from the galactic center. Previous studies have hinted at the wake’s existence, but the all-sky map confirms its presence and offers a detailed view of its shape, size, and location.

This disturbance in the halo also provides astronomers with an opportunity to study something they can’t observe directly: dark matter. While it doesn’t emit, reflect, or absorb light, the gravitational influence of dark matter has been observed across the universe. It is thought to create a scaffolding on which galaxies are built, such that without it, galaxies would fly apart as they spin. Dark matter is estimated to be five times more common in the universe than all the matter that emits and/or interacts with light, from stars to planets to gas clouds.

Although there are multiple theories about the nature of dark matter, all of them indicate that it should be present in the Milky Way’s halo. If that’s the case, then as the LMC sails through this region, it should leave a wake in the dark matter as well. The wake observed in the new star map is thought to be the outline of this dark matter wake; the stars are like leaves on the surface of this invisible ocean, their position shifting with the dark matter.

The interaction between the dark matter and the Large Magellanic Cloud has big implications for our galaxy. As the LMC orbits the Milky Way, the dark matter’s gravity drags on the LMC and slows it down. This will cause the dwarf galaxy’s orbit to get smaller and smaller, until the galaxy finally collides with the Milky Way in about 2 billion years. These types of mergers might be a key driver in the growth of massive galaxies across the universe. In fact, astronomers think the Milky Way merged with another small galaxy about 10 billion years ago.

“This robbing of a smaller galaxy’s energy is not only why the LMC is merging with the Milky Way, but also why all galaxy mergers happen,” said Rohan Naidu, a doctoral student in astronomy at Harvard University and a co-author of the new paper. “The wake in our map is a really neat confirmation that our basic picture for how galaxies merge is on point!”

The authors of the paper also think the new map – along with additional data and theoretical analyses – may provide a test for different theories about the nature of dark matter, such as whether it consists of particles, like regular matter, and what the properties of those particles are.

“You can imagine that the wake behind a boat will be different if the boat is sailing through water or through honey,” said Charlie Conroy, a professor at Harvard University and an astronomer at the Center for Astrophysics | Harvard & Smithsonian, who coauthored the study. “In this case, the properties of the wake are determined by which dark matter theory we apply.”

Conroy led the team that mapped the positions of over 1,300 stars in the halo. The challenge arose in trying to measure the exact distance from Earth to a large portion of those stars: It’s often impossible to figure out whether a star is faint and close by or bright and far away. The team used data from ESA’s Gaia mission, which provides the location of many stars in the sky but cannot measure distances to the stars in the Milky Way’s outer regions.

After identifying stars most likely located in the halo (because they were not obviously inside our galaxy or the LMC), the team looked for stars belonging to a class of giant stars with a specific light “signature” detectable by NEOWISE. Knowing the basic properties of the selected stars enabled the team to figure out their distance from Earth and create the new map. It charts a region starting about 200,000 light-years from the Milky Way’s center, or about where the LMC’s wake was predicted to begin, and extends about 125,000 light-years beyond that.

Conroy and his colleagues were inspired to hunt for LMC’s wake after learning about a team of astrophysicists at the University of Arizona in Tucson that makes computer models predicting what dark matter in the galactic halo should look like. The two groups worked together on the new study.

One model by the Arizona team, included in the new study, predicted the general structure and specific location of the star wake revealed in the new map. Once the data had confirmed that the model was correct, the team could confirm what other investigations have also hinted at: that the LMC is likely on its first orbit around the Milky Way. If the smaller galaxy had already made multiple orbits, the shape and location of the wake would be significantly different from what has been observed. Astronomers think the LMC formed in the same environment as the Milky Way and another nearby galaxy, M31, and that it is close to completing a long first orbit around our galaxy (about 13 billion years). Its next orbit will be much shorter due to its interaction with the Milky Way.

“Confirming our theoretical prediction with observational data tells us that our understanding of the interaction between these two galaxies, including the dark matter, is on the right track,” said University of Arizona doctoral student in astronomy Nicolás Garavito-Camargo, who led work on the model used in the paper.

The new map also provides astronomers with a rare opportunity to test the properties of the dark matter (the notional water or honey) in our own galaxy. In the new study, Garavito-Camargo and colleagues used a popular dark matter theory called cold dark matter that fits the observed star map relatively well. Now the University of Arizona team is running simulations that use different dark matter theories to see which one best matches the wake observed in the stars.

“It’s a really special set of circumstances that came together to create this scenario that lets us test our dark matter theories,” said Gurtina Besla, a co-author of the study and an associate professor at the University of Arizona. “But we can only realize that test with the combination of this new map and the dark matter simulations that we built.”

Launched in 2009, the WISE spacecraft was placed into hibernation in 2011 after completing its primary mission. In September 2013, NASA reactivated the spacecraft with the primary goal of scanning for near-Earth objects, or NEOs, and the mission and spacecraft were renamed NEOWISE. NASA’s Jet Propulsion Laboratory in Southern California managed and operated WISE for NASA’s Science Mission Directorate. The mission was selected competitively under NASA’s Explorers Program managed by the agency’s Goddard Space Flight Center in Greenbelt, Maryland. NEOWISE is a project of JPL, a division of Caltech, and the University of Arizona, supported by NASA’s Planetary Defense Coordination Office.