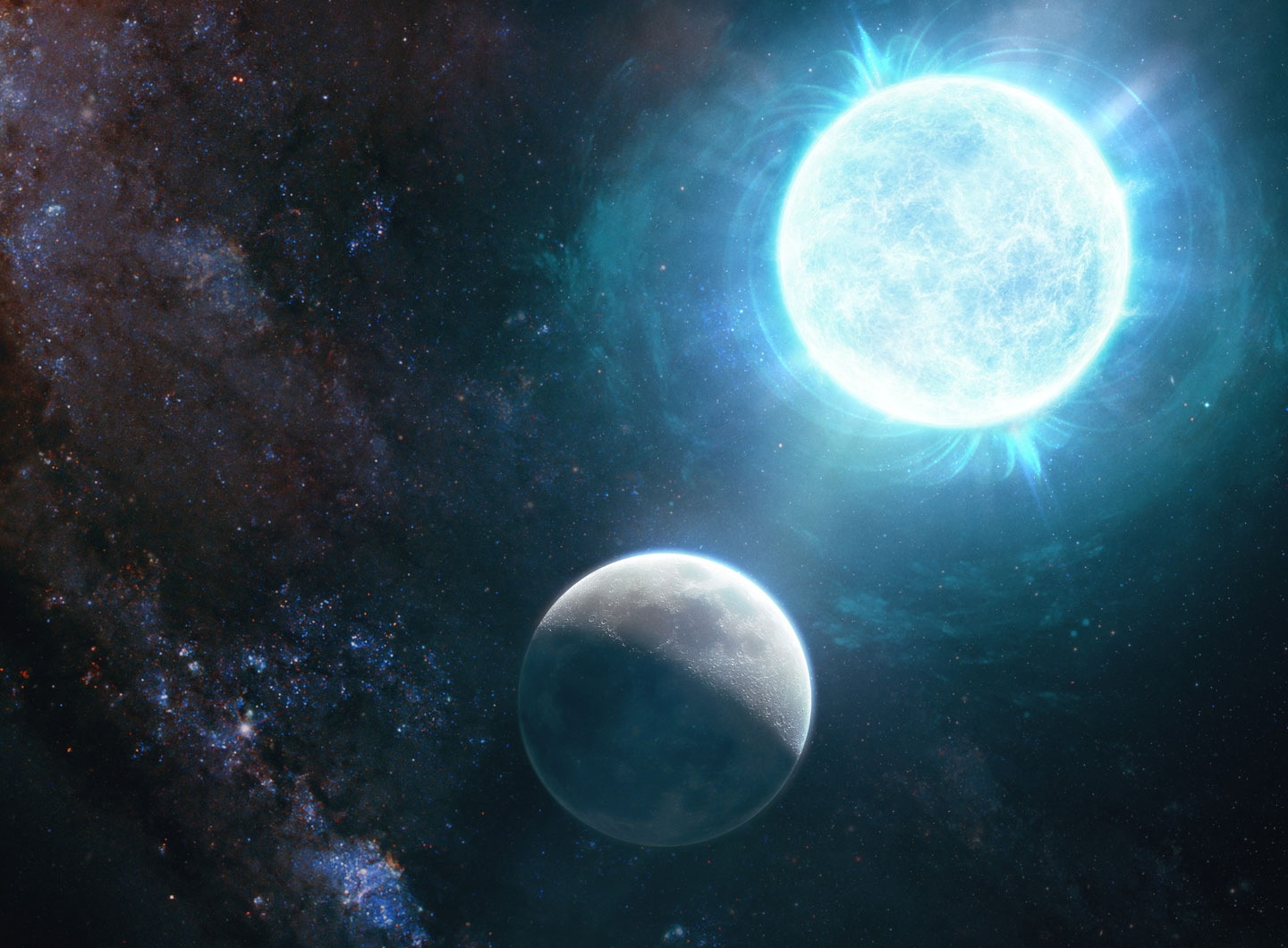 A White Dwarf Living on the Edge

Astronomers have discovered the smallest and most massive white dwarf ever seen. The smoldering cinder, which formed when two less massive white dwarfs merged, is about 4,300 kilometers across, or somewhat larger than Earth's moon.

Though the white dwarf is small, it is heavy, "packing a mass greater than that of our sun into a body about the size of our moon," says Ilaria Caiazzo, the Sherman Fairchild Postdoctoral Scholar Research Associate in Theoretical Astrophysics at Caltech and lead author of the new study appearing in the July 1 issue of the journal Nature. "It may seem counterintuitive, but smaller white dwarfs happen to be more massive. This is due to the fact that white dwarfs lack the nuclear burning that keeps up normal stars against their own self-gravity, and their size is instead regulated by quantum mechanics."

The discovery was made by the Zwicky Transient Facility, or ZTF, which operates at Caltech's Palomar Observatory; a host of other telescopes helped characterize the dead star, including: the 200-inch Hale Telescope at Palomar, the W. M. Keck Observatory's Keck I telescope, the European Gaia space observatory, the University of Hawaii's Pan-STARRS (Panoramic Survey Telescope and Rapid Response System), and NASA's Neil Gehrels Swift Observatory (the observatory was renamed after Gehrels, a Caltech alumnus, who passed away in 2017). ZTF is funded by the National Science Foundation (NSF) and other collaborators.

White dwarfs are the collapsed remnants of stars that were once about eight times the mass of our sun or lighter. Our sun, for example, after it first puffs up into a red giant in about 5 billion years, will ultimately slough off its outer layers and shrink down into a compact white dwarf. About 97 percent of all stars become white dwarfs.

While our sun is alone in space without a stellar partner, many stars orbit around each other in pairs. The stars grow old together, and if they are both less than eight solar masses, they will both evolve into white dwarfs.

The new discovery provides an example of what can happen after this phase. The pair of white dwarfs, which spiral around each other, lose energy in the form of gravitational waves and ultimately merge. If the dead stars are massive enough, they explode in what is called a type Ia supernova. But if they are below a certain mass threshold, they combine together into a new white dwarf that is heavier than either progenitor star. This process of merging boosts the magnetic field of that star and speeds up its rotation compared to that of the progenitors.

Astronomers say that the newfound tiny white dwarf, named ZTF J1901+1458, took the latter route of evolution. Because the sum of the masses of its progenitors was just below the mass limit at which a white dwarf would explode, the merger produced a white dwarf 1.35 times the mass of our sun. The white dwarf has an extreme magnetic field almost one billion times stronger than our sun's and whips around on its axis at a frenzied pace of one revolution every seven minutes. (The zippiest white dwarf known, called EPIC 228939929, rotates every 5.3 minutes).

"We caught this very interesting object that wasn't quite massive enough to explode," says Caiazzo. "We are truly probing how massive a white dwarf can be."

What is more, Caiazzo and her collaborators think that the merged white dwarf may be massive enough to evolve into a neutron-rich dead star, or neutron star, which typically forms when a star much more massive than our sun explodes in a supernova.

"This is highly speculative, but it's possible that the white dwarf is massive enough to further collapse into a neutron star," says Caiazzo. "It is so massive and dense that, in its core, electrons are being captured by protons in nuclei to form neutrons. Because the pressure from electrons pushes against the force of gravity, keeping the star intact, the core collapses when a large enough number of electrons are removed."

If this neutron star formation hypothesis is correct, it may mean that a significant portion of other neutron stars take shape in this way. The newfound object's close proximity (about 130 light-years away) and its young age (about 100 million years old or less) indicate that similar objects may occur more commonly in our galaxy.

The white dwarf ZTF J1901+1458 was first spotted by Caiazzo's colleague Kevin Burdge, a postdoctoral scholar at Caltech, after searching through all-sky images captured by ZTF. ZTF scans the entire northern sky every two nights looking for objects that blink, erupt, move, or otherwise change in brightness. This particular white dwarf, when analyzed in combination with data from Gaia, stood out for being very massive and having a rapid rotation.

"Fast time-domain surveys like ZTF are powerful tools for studying phenomena on extremely short timescales, such as this object, the most massive white dwarf known, which completes a full rotation every few minutes," says Burdge. In 2019, Burdge led the team that discovered a pair of white dwarfs zipping around each other every seven minutes. "No one has systematically been able to explore short-timescale astronomical phenomena on this kind of scale until now. The results of these efforts are stunning."

The team then analyzed the spectrum of the star using Keck I, and that is when Caiazzo was struck by the signatures of a very powerful magnetic field and realized that she and her team had found something "very special," as she says. The strength of the magnetic field together with the seven-minute rotational speed of the object indicated that it was the result of two smaller white dwarfs coalescing into one.

Data from Swift, which observes ultraviolet light, helped nail down the size and mass of the white dwarf, further painting a picture of a very extreme object. With a diameter of 4,300 kilometers across, or 2,670 miles, ZTF J1901+1458 secures the title for the smallest known white dwarf, edging out previous record holders, RE J0317-853 and WD 1832+089, which each have diameters of about 5,000 kilometers across, or 3,100 miles.

In the future, Caiazzo hopes to use ZTF to find more white dwarfs like this one, and, in general, to study the population as a whole. "There are so many questions to address, such as what is the rate of white dwarf mergers in the galaxy, and is it enough to explain the number of type Ia supernovae? How is a magnetic field generated in these powerful events, and why is there such diversity in magnetic field strengths among white dwarfs? Finding a large population of white dwarfs born from mergers will help us answer all these questions and more."

"The discovery of this unique object illustrates the power of ZTF. By making hundreds of observations of the entire northern sky spread over several years, we can continue to identify exotic objects like this one," says co-author Tom Prince, the Ira S. Bowen Professor of Physics at Caltech.

Caltech's ZTF is funded by the NSF and an international collaboration of partners. Additional support comes from the Heising–Simons Foundation and from Caltech. ZTF data are processed and archived by IPAC. NASA supports ZTF's search for near-Earth objects through the Near-Earth Object Observations program.

The study, titled "A highly magnetised and rapidly rotating white dwarf as small as the Moon," was funded by the Rose Hills Foundation, the Alfred P. Sloan Foundation, NASA, the Heising–Simons Foundation, the A. F. Morrison Fellowship of the Lick Observatory, the NSF, and the Natural Sciences and Engineering Research Council of Canada.