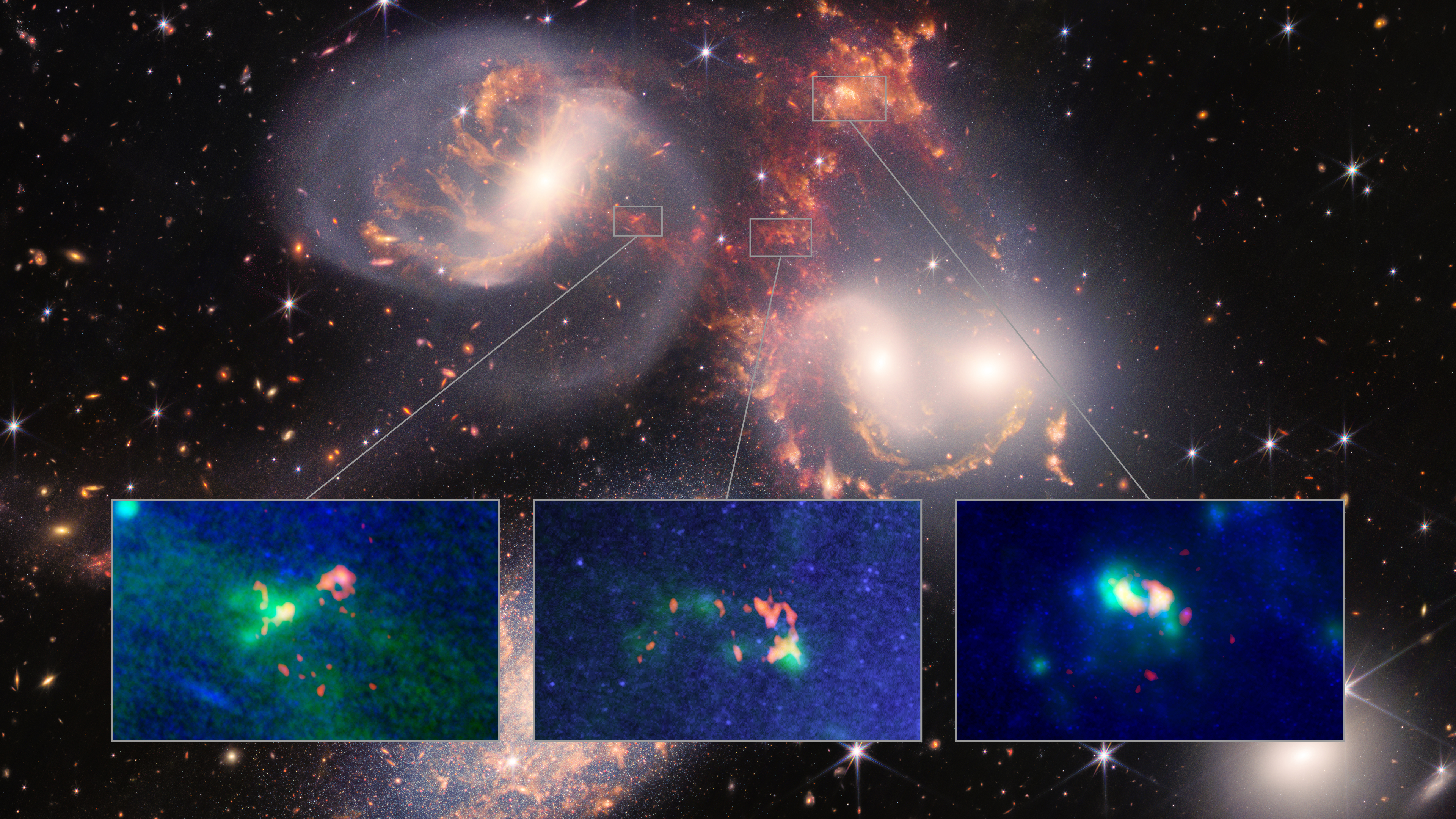 Shockwaves resulting from the violent collision between an intruder galaxy and Stephan’s Quintet are helping astronomers to understand how turbulence influences gas in the intergalactic medium. New observations with the Atacama Large Millimeter/submillimeter Array (ALMA) and the James Webb Space Telescope (JWST) have revealed that a sonic boom several times the size of the Milky Way has kickstarted a recycling plant for warm and cold molecular hydrogen gas. What’s more, scientists uncovered the break-up of a giant cloud into a fog of warm gas, the possible collision of two clouds forming a splash of warm gas around them, and the formation of a new galaxy. The observations were presented today in a press conference at the 241st meeting of the American Astronomical Society (AAS) in Seattle, Washington.

Stephan’s Quintet is a group of five galaxies—NGC 7317, NGC 7318a, NGC 7318b, NGC 7319, and NGC 7320— generally located about 270 million light-years from Earth in the constellation Pegasus. The group provides a pristine laboratory for the study of galaxy collisions and their impact on the surrounding environment. Typically galaxy collisions and mergers trigger a burst of star formation; that’s not the case in Stephan’s Quintet. Instead, this violent activity is taking place in the intergalactic medium, away from the galaxies in places where there is little to no star formation to obstruct the view.

That clean window into the Universe has allowed astronomers to watch what’s happening as one of the galaxies, NGC 7318b, violently intrudes into the group at a relative speed of roughly 800 km/second. At that speed, a trip from Earth to the Moon would take just eight minutes. “As this intruder crashes into the group, it is colliding with an old gas streamer that likely was caused by a previous interaction between two of the other galaxies, and is causing a giant shockwave to form,” said Philip Appleton, an astronomer and senior scientist at Caltech’s IPAC, and lead investigator on the project. “As the shockwave passes through this clumpy streamer, it is creating a highly turbulent, or unsteady, cooling layer, and it’s in the regions affected by this violent activity that we’re seeing unexpected structures and the recycling of molecular hydrogen gas. This is important because molecular hydrogen forms the raw material that may ultimately form stars, so understanding its fate will tell us more about the evolution of Stephan’s Quintet and galaxies in general.”

The new observations using ALMA’s Band 6 (1.3mm wavelength) receiver— developed by the U.S. National Science Foundation‘s National Radio Astronomy Observatory (NRAO)— allowed scientists to zoom into three key regions in extreme detail, and for the first time, build a clear picture of how the hydrogen gas is moving and being shaped on a continuous basis.

“The power of ALMA is obvious in these observations, providing astronomers new insights and better understanding of these previously unknown processes,” said Joe Pesce, Program Officer for ALMA at the U.S. National Science Foundation (NSF).

The region at the center of the main shock wave, dubbed Field 6, revealed a giant cloud of cold molecules that is being broken apart and stretched out into a long tail of warm molecular hydrogen and repeatedly recycled through these same phases. “What we’re seeing is the disintegration of a giant cloud of cold molecules in super-hot gas, and interestingly, the gas doesn’t survive the shock, it just cycles through warm and cold phases,” said Appleton. “We don’t yet fully understand these cycles, but we know the gas is being recycled because the length of the tail is longer than the time it takes for the clouds it is made from to be destroyed.”

This intergalactic recycling plant isn’t the only strange activity resulting from the shockwaves. In the region dubbed Field 5, scientists observed two cold gas clouds connected by a stream of warm molecular hydrogen gas. Curiously, one of the clouds— which resembles a high-speed bullet of cold hydrogen gas colliding with a large thread-like filament of spread out gas— created a ring in the structure as it punched through. The energy caused by this collision is feeding the warm envelope of gas around the region, but scientists aren’t quite sure what that means because they don’t yet have detailed observational data for the warm gas. “A molecular cloud piercing through intergalactic gas, and leaving havoc in its wake, may be rare and not yet fully understood,” said Bjorn Emonts, an astronomer at NRAO and a co-investigator on the project. “​​But our data show that we have taken the next step in understanding the shocking behavior and turbulent life-cycle of molecular gas clouds in Stephan’s Quintet.”

Perhaps the most “normal” of the bunch is the region dubbed Field 4, where scientists found a steadier, less turbulent environment that allowed hydrogen gas to collapse into a disk of stars and what scientists believe is a small dwarf galaxy in formation. “In field 4, it is likely that pre-existing large clouds of dense gas have become unstable because of the shock, and have collapsed to form new stars as we expect, ” said Pierre Guillard, a researcher at the Institut d’Astrophysique de Paris and a co-investigator on the project, adding that all of the new observations have significant implications for theoretical models of the impact of turbulence in the Universe. “The shock wave in the intergalactic medium of Stephan’s Quintet has formed as much cold molecular gas as we have in our own Milky Way, and yet, it forms stars at a much slower rate than expected. Understanding why this material is sterile is a real challenge for theorists. Additional work is needed to understand the role of high levels of turbulence and efficient mixing between the cold and hot gas.”

Prior to the ALMA observations, scientists had little idea all of this was playing out in the Quintet’s intergalactic medium, but it wasn’t for lack of trying. In 2010, the team used NASA’s Spitzer Space Telescope to observe Stephan’s Quintet and discovered large clouds of warm— estimated to be between 100° to 400° Kelvin, or roughly -280° to 260° Fahrenheit— molecular hydrogen mixed in with the super-hot gas. “These clouds should have been destroyed by the large-scale shockwave moving through the group, but weren’t. And we wanted to know, and still want to know, how did they survive?” said Appleton.

To solve the mystery, the team needed more and different technological power and capability. ALMA’s first light occurred more than a year later, in late 2011 and JWST captured its first images earlier this year. The combination of these powerful resources has provided strikingly beautiful infrared images of Stephan’s Quintet, and a tantalizing, though incomplete, understanding of the relationship between the cold, warm molecular, and ionized hydrogen gases in the wake of the giant shockwave. The team now needs spectroscopic data to unlock the secrets of the warm molecular hydrogen gas.

“These new observations have given us some answers, but ultimately showed us just how much we don’t yet know,” said Appleton. “While we now have a better understanding of the gas structures and the role of turbulence in creating and sustaining them, future spectroscopic observations will trace the motions of the gas through the doppler effect, tell us how fast the warm gas is moving, allow us to measure the temperature of the warm gas, and see how the gas is being cooled or warmed by the shockwaves. Essentially, we’ve got one side of the story. Now it’s time to get the other.”

Date: January 19th, 2023
Category: IPAC News
Image Link: Stephans_Quintet.jpg
Image Caption
A team of astronomers led by IPAC scientist Phil Appleton using the Atacama Large Millimeter/submillimeter Array (ALMA) and the James Webb Space Telescope (JWST) discovered a recycling plant for warm and cold molecular hydrogen gas in Stephan’s Quintet, and it’s causing mysterious things to happen. At left: Field 6, which sits at the center of the main shock wave, is recycling warm and cold hydrogen gas as a giant cloud of cold molecules is stretched out into a warm tail of molecular hydrogen over and over again. At center: Field 5 unveiled two cold gas clouds connected by a stream of warm molecular hydrogen gas characterized by a high-speed collision that is feeding the warm envelope of gas around the region. At right: Field 4 revealed a steadier, less turbulent environment where hydrogen gas collapsed, forming what scientists believe to be a small dwarf galaxy in formation. Credit: ALMA (ESO/NAOJ/NRAO)/JWST/ P. Appleton (Caltech), B.Saxton (NRAO/AUI/NSF)