NASA’s Nancy Grace Roman Space Telescope will study wispy streams of stars that extend far beyond the apparent edges of many galaxies. Missions like the Hubble and James Webb space telescopes would have to patch together hundreds of small images to see these structures around nearby galaxies in full. Roman will do so in a single snapshot. Astronomers will use these observations to explore how galaxies grow and the nature of dark matter.

Stellar streams look like ethereal strands of hair extending outward from some galaxies, peacefully drifting through space as part of the halo – a spherical region surrounding a galaxy. But these stellar flyaways are signs of an ancient cosmic-scale drama that serve as fossil records of a galaxy’s past. Studying them transforms astronomers into galactic archaeologists.

“Halos are mostly made from stars that were stripped away from other galaxies,” said Tjitske Starkenburg, a postdoctoral fellow at Northwestern University in Evanston, Illinois, who examined Roman’s potential in this area. “Roman’s wide, deep images will be sharp enough that we can resolve individual stars in other galaxies’ halos, making it possible to study stellar streams in a large number of galaxies for the first time.”

The team, led by Starkenburg, will share their results at the American Astronomical Society's 240th meeting in Pasadena, California, today.

Simulations support the theory that galaxies grow in part by gobbling up smaller groups of stars. A dwarf galaxy captured into orbit by a larger one becomes distorted by gravity. Its stars drizzle out, tracing arcs and loops around the larger galaxy until they ultimately become its newest members.

Simulations support the theory that galaxies grow in part by gobbling up smaller groups of stars. A dwarf galaxy captured into orbit by a larger one becomes distorted by gravity. Its stars drizzle out, tracing arcs and loops around the larger galaxy until they ultimately become its newest members.

“As individual stars leak out of the dwarf galaxy and fall into the more massive one, they form long, thin streams that remain intact for billions of years,” said Sarah Pearson, a Hubble postdoctoral fellow at New York University in New York City and the lead author of a separate study about the mission’s projected observations in this area. “So stellar streams hold secrets from the past and can illuminate billions of years of evolution.”

Astronomers have caught this cannibalistic process in the act using telescopes like ESA's (European Space Agency's) Gaia satellite, which is fine-tuned to measure the positions and motions of stars in our Milky Way galaxy. Roman will extend these observations by making similar measurements of stars in both the Milky Way and other galaxies.

The Milky Way is home to at least 70 stellar streams, meaning it has likely eaten at least 70 dwarf galaxies or globular star clusters – groups of hundreds of thousands of gravitationally bound stars. Roman’s Milky Way images could allow astronomers to string together snapshots in time to show stars’ movement. That will help us learn about what dark matter – invisible matter that we can only detect via its gravitational effects on visible objects – is made of.

One theory suggests dark matter is “cold,” or made up of heavy, sluggish particles. If so, it should clump together within galaxy halos, which would disturb stellar streams in ways Roman could see. By either detecting or ruling out these distortions, Roman could narrow down the candidates for what dark matter could be made of.

Astronomers are also looking forward to studying stellar streams in several of the Milky Way’s neighboring galaxies. They aren’t well studied in other galaxies because they’re so faint and far away. They’re also so vast that they can wrap around an entire galaxy. It takes an unrivaled panoramic view like Roman’s to capture images that are both large and detailed enough to see them. 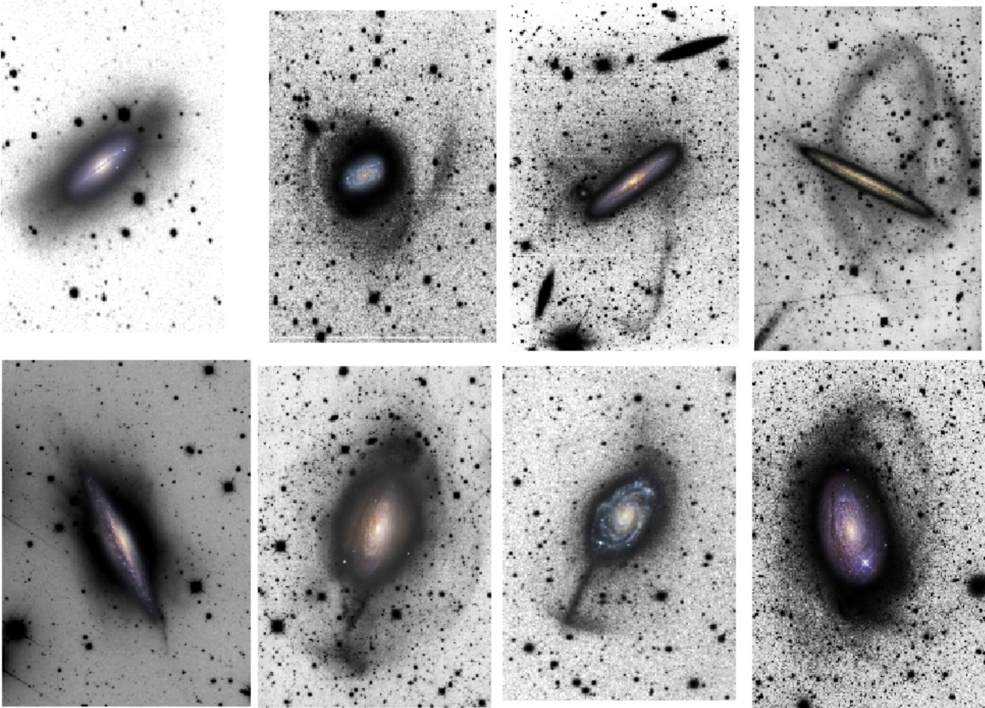 This series of images shows how astronomers find stellar streams by reversing the light and dark, similar to negative images. Color images of each of the nearby galaxies featured are included for context. Galaxies are surrounded by enormous halos of hot gas sprinkled with sporadic stars, seen as the shadowy regions that encase each galaxy here. Roman could improve on these observations by resolving individual stars to understand each stream’s stellar populations and see stellar streams of various sizes in even more galaxies. Credits: Carlin et al. (2016), based on images from Martínez-Delgado et al. (2008, 2010)

Especially elusive stellar streams that formed when the Milky Way siphoned stars from globular star clusters have been detected before, but they’ve never been found in other galaxies. They’re fainter because they contain fewer stars, which makes them much more difficult to spot in other, more distant galaxies.

Roman may detect them in several of our neighboring galaxies for the first time ever. The mission’s wide, sharp, deep vision should even reveal individual stars in these enormous, dim structures. In a previous study, Pearson led the development of an algorithm to systematically search for stellar streams originating from globular clusters in neighboring galaxies.

Starkenburg’s new study adds to the picture by predicting that Roman should be able to detect dozens of streams in other galaxies that originated from dwarf galaxies, offering unprecedented insight into the way galaxies grow.

“It’s exciting to learn more about our Milky Way, but if we truly want to understand galaxy formation and dark matter we need a larger sample size,” Starkenburg said. “Studying stellar streams in other galaxies with Roman will help us see the bigger picture.”