When it launches in the mid-2020s, NASA’s Nancy Grace Roman Space Telescope will create enormous panoramic pictures of space in unprecedented detail. The mission’s wide field of view will enable scientists to conduct sweeping cosmic surveys, yielding a wealth of new information about the universe.

The Roman mission’s ground system, which will make data from the spacecraft available to scientists and the public, has just successfully completed its preliminary design review. The plan for science operations has met all of the design, schedule, and budget requirements, and will now proceed to the next phase: building the newly designed data system.

“This is an exciting milestone for the mission,” said Ken Carpenter, the Roman ground system project scientist at NASA’s Goddard Space Flight Center in Greenbelt, Maryland. “We are on track to complete the data system in time for launch, and we look forward to the ground-breaking science it will enable.”

Roman will have the same resolution as the Hubble Space Telescope but capture a field of view nearly 100 times larger. Scientists expect the spacecraft to collect more data than any of NASA’s other astrophysics missions. 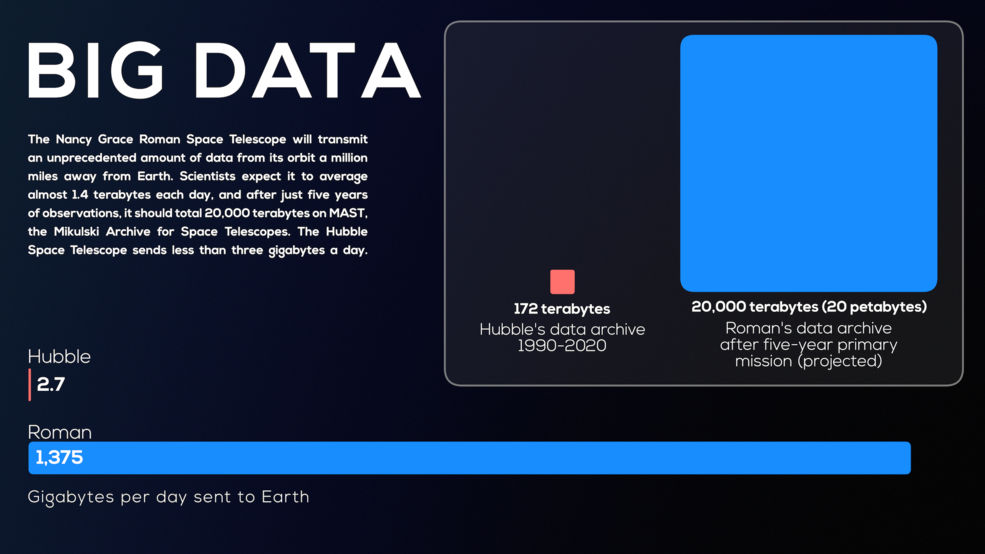 This infographic showcases the difference in data volume between the Nancy Grace Roman and Hubble space telescopes. Each day, Roman will send over 500 times more data back to Earth than Hubble. Credits: NASA’s Goddard Space Flight Center

Using Hubble’s observations, astronomers have revolutionized our view of the universe and unleashed a flood of discoveries. Hubble has gathered 172 terabytes of data since its launch in 1990. If all of this data were printed as text and the pages were placed on top of each other, the stack would reach about 5,000 miles (8,000 kilometers) high. That’s far enough to reach about 15 times higher than Hubble’s orbit, or about 2% of the distance to the Moon.

Roman will gather data about 500 times faster than Hubble, adding up to 20,000 terabytes (20 petabytes) over the course of its five-year primary mission. If this data were printed, the stack of papers would tower 330 miles (530 kilometers) high after a single day. By the end of Roman’s primary mission, the stack would extend well beyond the Moon. Untold cosmic treasures will be brought to light by Roman’s rich observations.

Such a vast volume of information will require NASA to rely on new processing and archival techniques. Scientists will access and analyze Roman’s data using cloud-based remote services and more sophisticated tools than those used by previous missions.

All of Roman’s data will be publicly available within days of the observations – a first for a NASA astrophysics flagship mission. This is significant because Roman’s colossal images will often contain far more than the primary target of observation.

Since scientists everywhere will have rapid access to the data, they will be able to quickly discover short-lived phenomena, such as supernova explosions. Detecting these phenomena quickly will allow other telescopes to perform follow-up observations.

One of the science areas that will benefit from the mission’s vast data is the microlensing survey. Gravitational lensing is an observational effect that occurs because the presence of mass warps the fabric of space-time. The effect is extreme around very massive objects, like black holes and entire galaxies. But even relatively small objects like stars and planets cause a detectable degree of warping, called microlensing.

Any time two stars align closely from our vantage point, light from the more distant star curves as it travels through the warped space-time around the nearer star. The nearer star acts like a natural cosmic lens, focusing and intensifying light from the background star.

Scientists see this as a spike in brightness. Planets orbiting the foreground star may also modify the lensed light, acting as their own tiny lenses. These small signatures drive the design of Roman’s microlensing survey.

“With such a large number of stars and frequent observations, Roman’s microlensing survey will see thousands of planetary events,” said Rachel Akeson, task lead for the Roman Science Support Center at IPAC/Caltech in Pasadena, California. “Each one will have a unique signature which we can use to determine the planet’s mass and distance from its star.”

Roman’s microlensing survey will also detect hundreds of other bizarre and interesting cosmic objects. Roman will discover starless planets that roam the galaxy as rogue worlds; brown dwarfs, which are too massive to be characterized as planets but not massive enough to ignite as stars; and stellar corpses, including neutron stars and black holes, which are left behind when stars exhaust their fuel.

Microlensing events are extremely rare and require extensive observations. Roman will monitor hundreds of millions of stars every 15 minutes for months at a time – something no other space telescope can do, generating an unprecedented stream of new information.

Gazing beyond our galaxy

While the microlensing survey will look toward the heart of our galaxy, where stars are most densely concentrated, Roman’s cosmological surveys will peer far beyond our stars to study hundreds of millions of other galaxies. These observations will help illuminate two of the biggest cosmic puzzles: dark matter and dark energy. 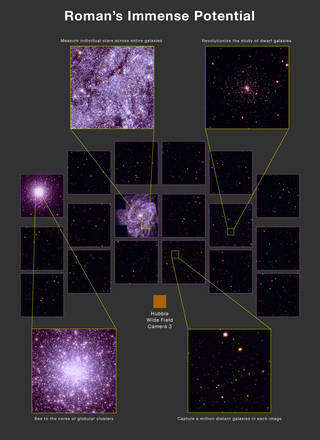 This simulated image illustrates the wide range of science enabled by Roman's extremely wide field of view and exquisite resolution. The purple squares, which all contain background imagery simulated using data from Hubble’s Cosmic Assembly Near-infrared Deep Extragalactic Survey (CANDELS) program, outline the area Roman can capture in a single observation. An orange square shows the field of view of Hubble’s Wide Field Camera 3 for comparison. While the CANDELS program took Hubble nearly 21 days to survey in near-infrared light, Roman’s large field of view and higher efficiency would allow it to survey the same area in less than half an hour. Top left: This view illustrates a region of the large nearby spiral galaxy M83. Top right: A hypothetical distant dwarf galaxy appears in this magnified view, demonstrating Roman’s ability to detect small, faint galaxies at large distances. Bottom left: This magnified view illustrates how Roman will be able to resolve bright stars even in the dense cores of globular star clusters. Bottom right: A zoom of the CANDELS-based background shows the density of high-redshift galaxies Roman will detect. Credits: Benjamin Williams, David Weinberg, Anil Seth, Eric Bell, Dave Sand, Dominic Benford, and the WINGS Science Investigation Team

Roman will help us figure out what dark matter is made of by exploring the structure and distribution of regular matter and dark matter across space and time. This investigation can only be done effectively using precise measurements from many galaxies.

The remaining approximately 68 percent of the universe is made up of dark energy. This mysterious cosmic pressure is causing the expansion of the universe to accelerate, but so far we don’t know much more about it.

Roman will study dark energy through multiple observational strategies, including surveys of galaxy clusters and supernovae. Scientists will create a 3D map of the universe to help us understand how the universe grew over time under the influence of dark energy.

Since Roman will have such a large field of view, it will dramatically reduce the amount of time needed to gather data. The Cosmic Assembly Near-infrared Deep Extragalactic Survey (CANDELS) is one of the largest projects ever done with Hubble, designed to study the development of galaxies over time. While it took Hubble nearly 21 days, Roman would complete a similar survey in less than half an hour – 1,000 times faster than Hubble. Using Roman, scientists will be able to extend these observations in ways that would be impractical with other telescopes.

“With its incredibly fast survey speeds, Roman will observe planets by the thousands, galaxies by the millions, and stars by the billions,” said Karoline Gilbert, mission scientist for the Roman Science Operations Center at the Space Telescope Science Institute in Baltimore. “These vast datasets will allow us to address cosmic mysteries that hint at new fundamental physics.”

The Nancy Grace Roman Space Telescope is managed at Goddard, with participation by NASA's Jet Propulsion Laboratory and Caltech/IPAC in Pasadena, the Space Telescope Science Institute in Baltimore, and a science team comprising scientists from research institutions across the United States.