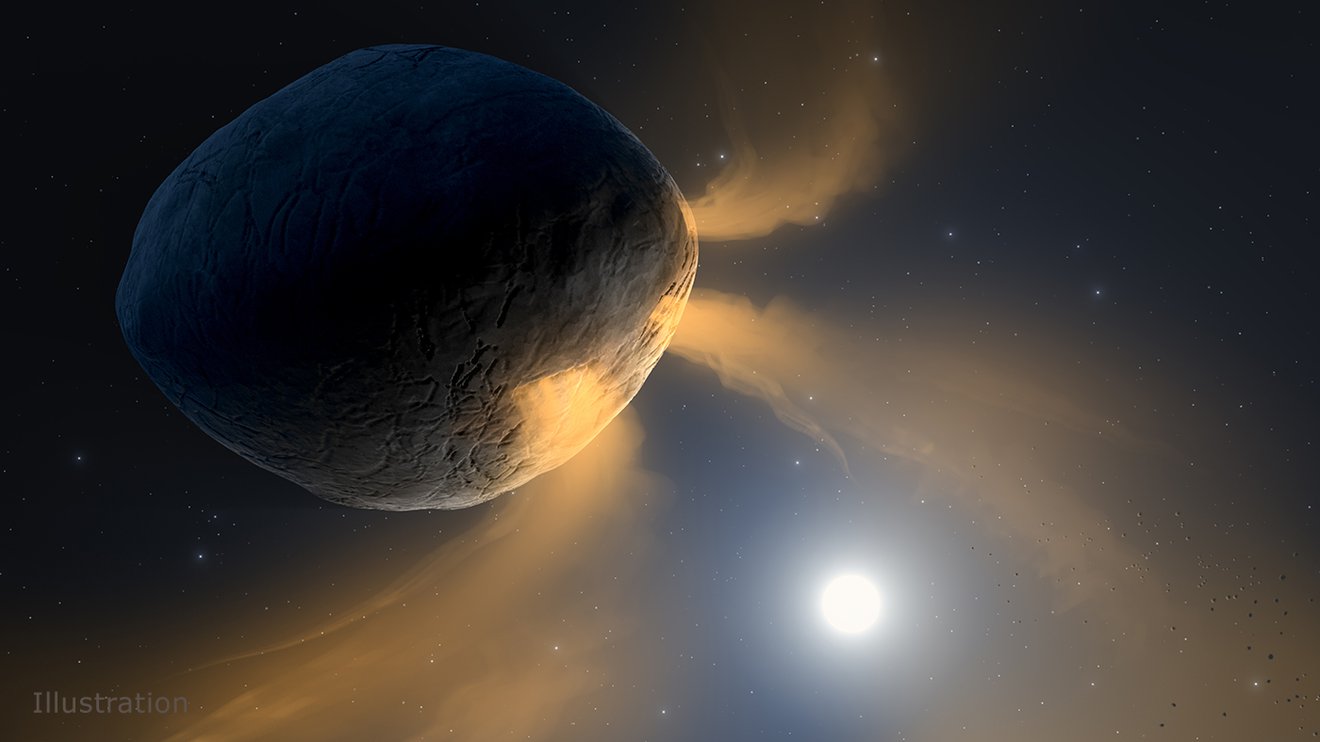 Models and lab tests suggest the asteroid could be venting sodium vapor as it orbits close to the Sun, explaining its increase in brightness.

As a comet zooms through the inner solar system, the Sun heats it, causing ices below the surface to vaporize into space. The venting vapor dislodges dust and rock, and the gas creates a bright tail that can extend millions of miles from the nucleus like an ethereal veil.

Whereas comets contain lots of different ices, asteroids are mainly rock and not known for producing such majestic displays. But a new study examines how near-Earth asteroid Phaethon may in fact exhibit cometlike activity, despite lacking significant quantities of ice.

Known to be the source of the annual Geminid meteor shower, the 3.6-mile-wide (5.8 kilometer-wide) asteroid brightens as it gets close to the Sun. Comets typically behave like this: When they heat up, their icy surfaces vaporize, causing them to become more active and brighten as the venting gases and dust scatter more sunlight. But what is causing Phaethon to brighten if not vaporizing ices?

The culprit could be sodium. As the new study’s authors explain, Phaethon’s elongated, 524-day orbit takes the object well within the orbit of Mercury, during which time the Sun heats the asteroid’s surface up to about 1,390 degrees Fahrenheit (750 degrees Celsius). With such a warm orbit, any water, carbon dioxide, or carbon monoxide ice near the asteroid’s surface would have been baked off long ago. But at that temperature, sodium may be fizzing from the asteroid’s rock and into space.

“Phaethon is a curious object that gets active as it approaches the Sun,” said study lead Joseph Masiero, a scientist at IPAC, a research organization at Caltech. “We know it’s an asteroid and the source of the Geminids. But it contains little to no ice, so we were intrigued by the possibility that sodium, which is relatively plentiful in asteroids, could be the element driving this activity.”

Masiero and his team were inspired by observations of the Geminids. When meteoroids – small pieces of rocky debris from space – streak through Earth’s atmosphere as meteors, they disintegrate. But before they do, friction with the atmosphere causes the air surrounding the meteoroids to reach thousands of degrees, generating light. The color of this light represents the elements they contain. Sodium, for example, creates an orange tinge. The Geminids are known to be low in sodium.

Until now, it was assumed that these small pieces of rock somehow lost their sodium after leaving the asteroid. This new study suggests that the sodium may actually play a key role in ejecting the Geminid meteoroids from Phaethon’s surface.

The researchers think that as the asteroid approaches the Sun, its sodium heats up and vaporizes. This process would have depleted the surface of sodium long ago, but sodium within the asteroid still heats up, vaporizes, and fizzes into space through cracks and fissures in Phaethon’s outermost crust. These jets would provide enough oomph to eject the rocky debris off its surface. So the fizzing sodium could explain not only the asteroid’s cometlike brightening, but also how the Geminid meteoroids would be ejected from the asteroid and why they contain little sodium.

“Asteroids like Phaethon have very weak gravity, so it doesn’t take a lot of force to kick debris from the surface or dislodge rock from a fracture,” said Björn Davidsson, a scientist at NASA’s Jet Propulsion Laboratory in Southern California and a co-author of the study. “Our models suggest that very small quantities of sodium are all that’s needed to do this – nothing explosive, like the erupting vapor from an icy comet’s surface; it’s more of a steady fizz.”

To find out if sodium turns to vapor and vents from an asteroid’s rock, the researchers tested samples of the Allende meteorite, which fell over Mexico in 1969, in a lab at JPL. The meteorite may have come from an asteroid comparable to Phaethon and belongs to a class of meteorites, called carbonaceous chondrites, that formed during the earliest days of the solar system. The researchers then heated chips of the meteorite to the highest temperature Phaethon would experience as it approaches the Sun.

“This temperature happens to be around the point that sodium escapes from its rocky components,” said Yang Liu, a scientist at JPL and a study co-author. “So we simulated this heating effect over the course of a ‘day’ on Phaethon – its three-hour rotation period – and, on comparing the samples’ minerals before and after our lab tests, the sodium was lost, while the other elements were left behind. This suggests that the same may be happening on Phaethon and seems to agree with the results of our models.”

The new study supports a growing body of evidence that categorizing small objects in our solar system as “asteroids” and “comets” is oversimplified, depending not only on how much ice they contain, but also what elements vaporize at higher temperatures.

“Our latest finding is that if the conditions are right, sodium may explain the nature of some active asteroids, making the spectrum between asteroids and comets even more complex than we previously realized,” said Masiero.

The study, titled “Volatility of Sodium in Carbonaceous Chondrites at Temperatures Consistent with Low-Perihelia Asteroids,” was published in The Planetary Science Journal on Aug. 16, 2021.