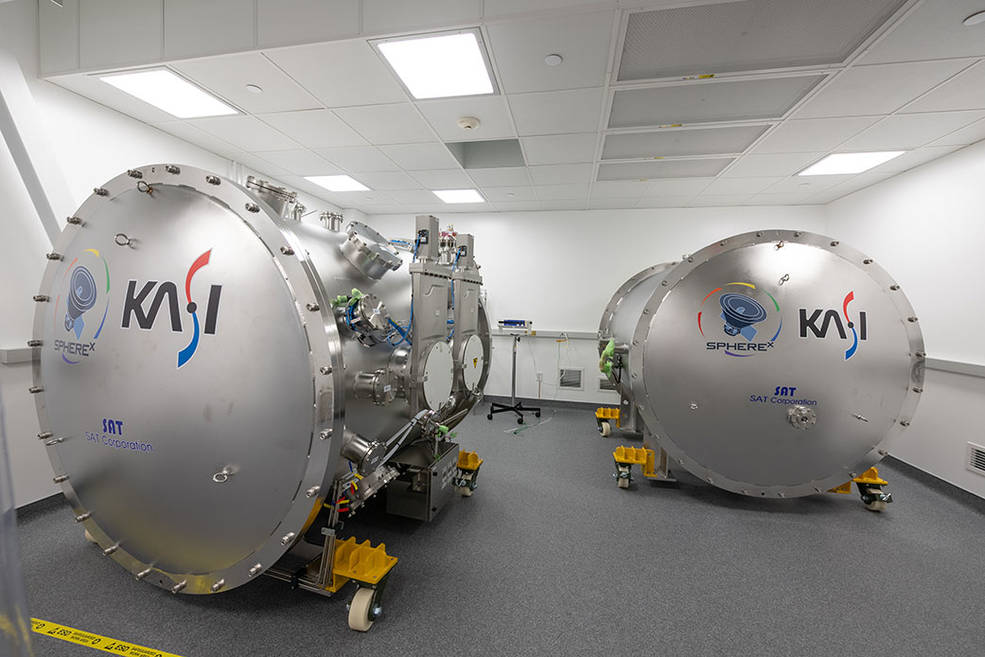 The SPHEREx mission will create a 3D map of the entire sky. Its cutting-edge instruments require a custom-built chamber to make sure they’ll be ready to operate in space.

After three years of design and construction, a monthlong boat ride across the Pacific Ocean, and a lift from a 30-ton crane, the customized test chamber for NASA’s upcoming SPHEREx mission has finally reached its destination at Caltech’s Cahill Center for Astronomy and Astrophysics in Pasadena.

Set to launch no earlier than June 2024, SPHEREx (short for Spectro-Photometer for the History of the Universe, Epoch of Reionization and Ices Explorer) will make a unique map of the cosmos that will contain hundreds of millions of objects, including stars, galaxies, star-forming regions, and other cosmic wonders. Unlike any previous map, it will provide images of individual objects, as well as a spectrum for every point in the sky. Spectra can contain a treasure trove of information about cosmic objects, including their chemical composition, age, and the distance to faraway galaxies. 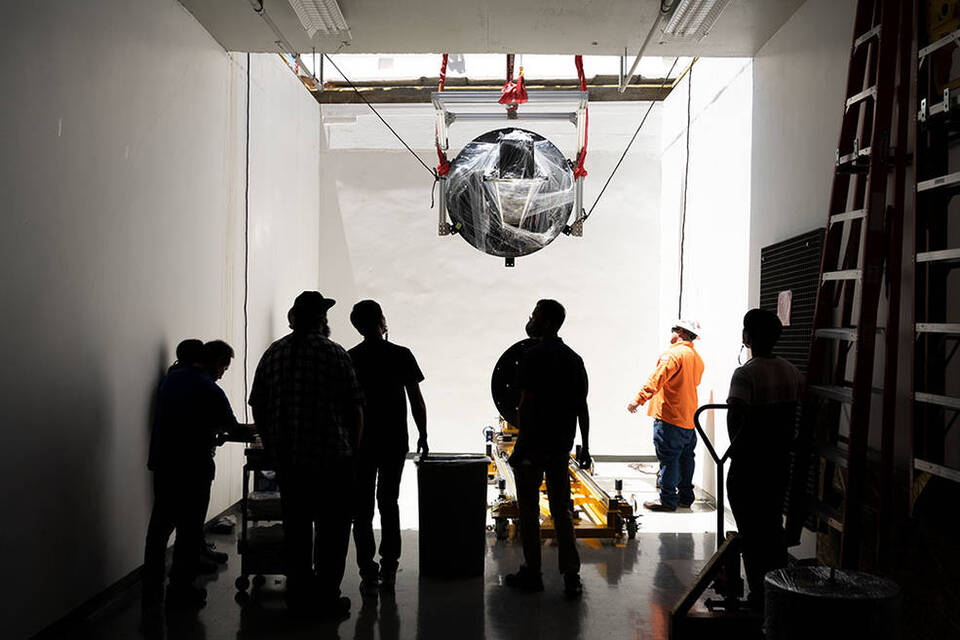 Testing hardware for NASA’s upcoming SPHEREx mission recently arrived at the Cahill Center for Astronomy and Astrophysics at Caltech in Pasadena, California. Too big to fit through the building’s front door, the hardware was lowered by crane from the street to the basement laboratory. Credits: NASA/JPL-Caltech

With this dynamic chart, scientists will be able to answer questions about what happened shortly after the big bang, the prevalence of life-sustaining molecules like water ice in our galaxy’s planet-forming regions, and how galaxies began and evolved over the universe’s lifetime.

But for SPHEREx to make that possible, the telescope must be able not only to withstand the rigors of space but also to thrive there. That’s where the custom test chamber comes in. About the size of a small SUV and made of stainless steel, the cylindrical chamber was built by the Korean Astronomy and Space Science Institute (KASI), a partner in the SPHEREx mission. It will be used to test SPHEREx’s detectors (essentially its cameras) and optics (the system that collects light from the cosmos).

The large, stainless steel cylinder on the left is a custom-built test chamber for NASA’s SPHEREx mission. An extension, on the right, can be attached to make the chamber larger in order to perform certain preflight tests. Credits: NASA/JPL-Caltech

Managed by NASA’s Jet Propulsion Laboratory, SPHEREx will detect infrared light, which human eyes can’t detect. Sometimes called heat radiation, it is emitted by warm objects, including stars and galaxies, as well as the telescope’s instruments. So the chamber is designed to cool the detectors to about minus 350 degrees Fahrenheit (about minus 200 degrees Celsius) to make sure their own heat won’t overwhelm the light from the objects they’re built to observe.

But first, the SPHEREx team needs to test whether the detectors are in focus. This is determined by their distance from the optics, similar to how moving a magnifying glass closer to or farther away from your eye brings objects into or out of focus. The team will have to get the distance between the detectors and the optics correct to within 0.0003 inches (7.5 micrometers), or about one-tenth the width of a human hair. To do this, they’ll point the optics and detectors at a projected source of infrared light located outside the chamber’s window, which is made of sapphire because glass blocks infrared. The source will serve as a stand-in for the objects that SPHEREx will observe in space, and the resulting image will tell engineers if the spacing is correct.

“A number of factors can influence the focus position of our instrument as it gets down to its operating temperature,” said Phil Korngut, the SPHEREx instrument scientist and a researcher at Caltech. “It’s absolutely essential that we get this thing sharply into focus before we fly, and the only way to accomplish that is through specific cryogenic optical testing in the environment provided by the KASI chamber.”

The chamber is also customized to calibrate the SPHEREx spectrometer, which will provide a spectrum of every point on the sky. 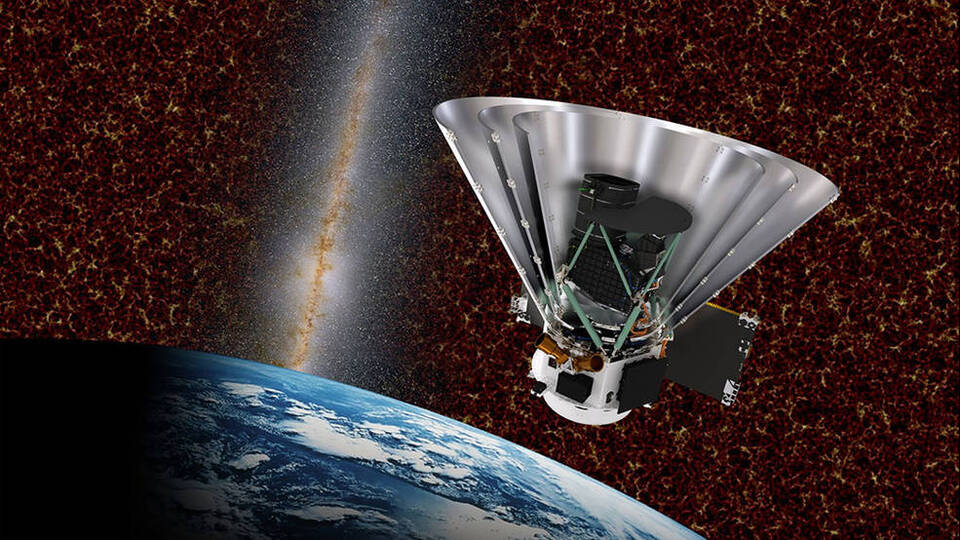 This illustration shows a cross section of NASA’s upcoming SPHERE mission, revealing the spacecraft’s telescope and detectors surrounded by three shiny photon shields that protect them from the Sun. Credits: NASA/JPL-Caltech

In 2018, KASI launched a mission called the Near-infrared Imaging Spectrometer for Star formation history (NISS), which has similarities to SPHEREx. Working on NISS gave the KASI team the right experience to build the custom chamber.

After traveling by ship from Korea to Long Beach, California, the chamber was transported north to Caltech. Too large to fit through the main entrance of its new home, it had to travel under the building: A 30-ton crane lifted off a removable section of an adjacent road and then lowered the test chamber, along with its components, into a high-ceilinged, windowless receiving room unofficially known as “the crypt.” The chamber was then wheeled into the SPHEREx test lab, where it will stay for about 18 months until the hardware tests are complete.

“Not only the SPHEREx team at KASI, but the whole Korean astronomical community are very interested in the SPHEREx data and its science objectives,” said Woong-Soeb Jeong, the principal investigator for SPHEREx for KASI. “So KASI’s participation in the SPHEREx mission is expected to have a great impact on the research in our astronomical community. That heritage will be of great help in developing our own medium- or large-class space telescope in the future.”

SPHEREx is managed by JPL for NASA’s Astrophysics Division within the Science Mission Directorate in Washington. The mission’s principal investigator, James Bock, has a joint position between Caltech and JPL. Ball Aerospace in Boulder, Colorado, will supply the spacecraft. The science analysis of the SPHEREx data will be conducted by a team of scientists located at 10 institutions across the U.S. and in South Korea. Data will be processed and archived at IPAC at Caltech. The SPHEREx dataset will be publicly available.

For more information about the SPHEREx mission visit:

Date: August 17th, 2022
Category: Project News
Image Link: e1b-chambers-in-lab-1041.jpeg
Image Caption
The large, stainless steel cylinder on the left is a custom-built test chamber for NASA’s SPHEREx mission. An extension, on the right, can be attached to make the chamber larger in order to perform certain preflight tests. Credits: NASA/JPL-Caltech