When NASA’s Nancy Grace Roman Space Telescope launches in the mid-2020s, it will revolutionize astronomy by providing a panoramic field of view at least 100 times greater than Hubble's at similar image sharpness, or resolution. The Roman Space Telescope will survey the sky up to thousands of times faster than can be done with Hubble. This combination of wide field, high resolution, and an efficient survey approach promises new understandings in many areas, particularly in how galaxies form and evolve over cosmic time. How did the largest structures in the universe assemble? How did our Milky Way galaxy come to be in its current form? These are among the questions that Roman will help answer.

Galaxies are conglomerations of stars, gas, dust, and dark matter. The largest can span hundreds of thousands of light-years. Many gather together in clusters containing hundreds of galaxies, while others are relatively isolated.

How galaxies change over time depends on many factors: for example, their history of star formation, how rapidly they formed stars over time, and how each generation of stars influenced the next through supernova explosions and stellar winds. To tease out these details, astronomers need to study large numbers of galaxies.

“Roman will give us the ability to see faint objects and view galaxies over long intervals of cosmic time. That will allow us to study how galaxies assembled and transformed,” said Swara Ravindranath, an astronomer at the Space Telescope Science Institute (STScI) in Baltimore, Maryland.

While wide-field imaging will be important for galaxy studies, just as important are Roman’s spectroscopic capabilities. A spectrograph takes light from an object and spreads it into a rainbow of colors known as a spectrum. From this range of colors, astronomers can glean many details otherwise unavailable, like an object’s distance or composition. Roman’s ability to provide a spectrum of every object within the field of view, combined with Roman imaging, will enable astronomers to learn more about the universe than from either imaging or spectroscopy alone. 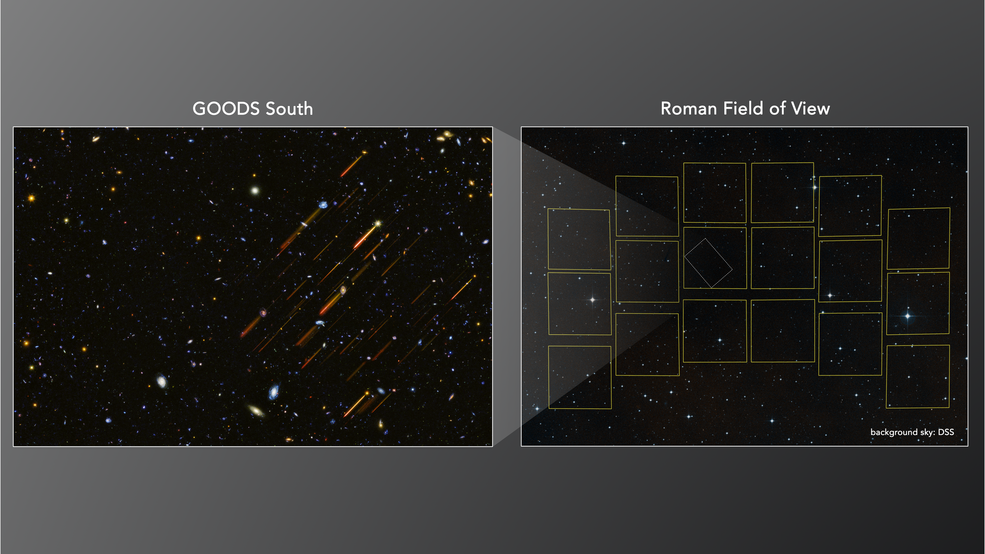 The Hubble image of a portion of the GOODS-South field (left) required multiple individual exposures that were stitched into a mosaic. The Roman Space Telescope will have a field of view (right) at least 100 times greater than Hubble, allowing it to capture data on thousands of galaxies in a single exposure. Credits: NASA, ESA, and J. DePasquale (STScI) Acknowledgement: DSS

Revealing when and where stars were born
Galaxies don’t form stars at a constant rate. They speed up and slow down – forming more or fewer stars – under the influence of a variety of factors, from collisions and mergers to supernova shock waves and galaxy-scale winds powered by supermassive black holes.

By studying a galaxy’s spectrum in detail, astronomers can explore the history of star formation. “Using Roman we can estimate how fast galaxies are making stars and find the most prolific galaxies that are producing stars at an enormous rate. More importantly, we can find out not only what’s happening in a galaxy at the moment we observe it, but what its history has been,” stated Lee Armus, an astronomer at IPAC/Caltech in Pasadena, California.

Some precocious galaxies birthed stars very rapidly for a short time, only to cease forming stars surprisingly early in the universe’s history, undergoing a rapid transition from lively to “dead.”

“We know galaxies shut off star formation, but we don’t know why. With Roman’s wide field of view, we stand a better chance of catching these galaxies in the act,” said Kate Whitaker, an astronomer at the University of Massachusetts in Amherst.

Growing the cosmic web
Even as galaxies themselves have grown over time, they also have gathered together in groups to form intricate structures billions of light-years across. Galaxies tend to collect into bubbles, sheets, and filaments, creating a vast cosmic web. By combining high-resolution imaging, which yields a galaxy’s position on the sky, with spectroscopy, which provides a distance, astronomers can map this web in three dimensions and learn about the universe’s large-scale structure.

This animation portrays the complementary nature of imaging and spectroscopy to understand galaxies. It begins with a portion of the Hubble GOODS-South field, a region of the sky containing hundreds of visible galaxies. Then rainbow-colored lines called spectra are added next to selected galaxies; in reality, every star and galaxy has its light spread out. The underlying image later fades away to highlight the galaxies’ spectra, which contain a wealth of information including distances (redshifts). The image and spectra were obtained by Hubble and illustrate what will be done with Roman, but over a vastly larger number of galaxies.
Credits: NASA, ESA, and J. DePasquale (STScI)

The expansion of the universe stretches light from distant galaxies to longer, redder wavelengths – a phenomenon called redshift. The more distant a galaxy is, the greater its redshift. Roman’s infrared detectors are ideal for capturing light from those galaxies. More distant galaxies are also fainter and harder to spot. Combining this with the fact that that some galaxy types are rare, you have to search a larger area of the sky with a more sensitive observatory to find the objects that often have the most interesting stories to tell.

“Right now, with telescopes like Hubble we can sample tens of high-redshift galaxies. With Roman, we’ll be able to sample thousands,” explained Russell Ryan, an astronomer at STScI.

Seeking the unknown
While astronomers can anticipate many of the discoveries of the Roman Space Telescope, perhaps most exciting is the possibility of finding things that no one could have predicted. Typical high-resolution observations from space-based observatories, like Hubble, target specific objects for detailed investigation. Roman’s survey approach will cast a wide net, thereby opening up a new “discovery space.”

“Roman will excel in unknown unknowns. It will certainly find rare, exotic things that we don’t expect,” said Ryan.

“Roman’s combined imaging and spectroscopy surveys will gather the ‘gold nuggets’ that we never would have mined otherwise,” added Ravindranath.

The Roman Space Telescope is designed for large surveys of the sky. This animation gives a sense of the scale of just one of Roman’s potential survey areas, which would span an area of 2,000 square degrees – about 10,000 times the size of the full Moon.
Credits: NASA/Caltech-IPAC/R. Hurt Acknowledgement: This animation has made use of the Stellarium planetarium.

Banner image: This portion of the Hubble GOODS-South field contains hundreds of visible galaxies. A representative sample of those galaxies on the right half of the image also have their spectra overlayed in a representation of slitless spectroscopy. By using slitless spectroscopy, a spectrum is obtained that contains both spatial and wavelength information. For example, the inset highlights a spiral galaxy that shines brightly in the emission line of hydrogen-alpha (Ha) as well as in broad starlight (the horizontal strip of light). Its spiral shape is traced by the Ha portion of the spectrum. By combining imaging and spectroscopy, astronomers can learn much more than from each technique alone. Credit: NASA, ESA, and J. DePasquale (STScI)