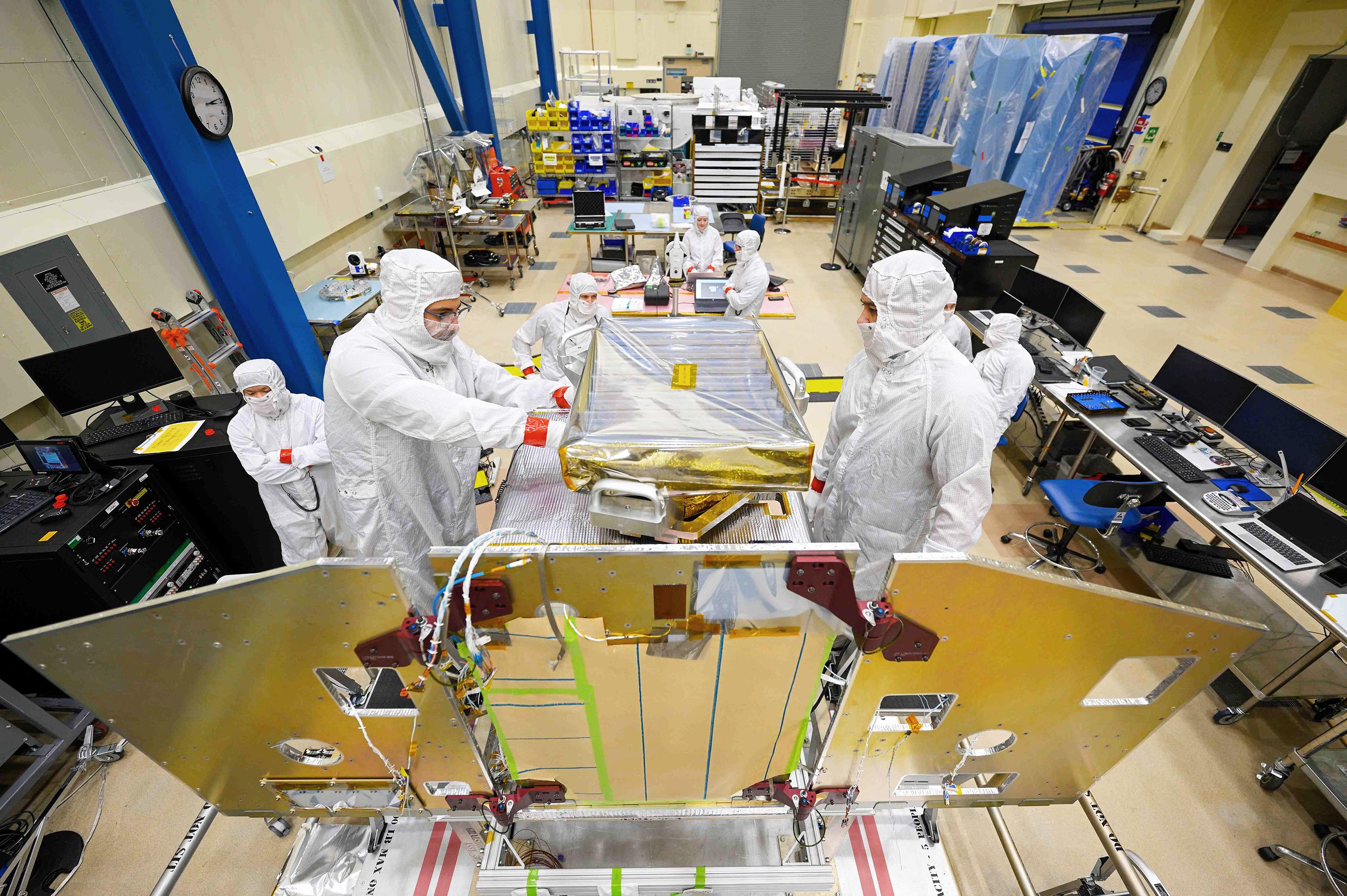 Lunar Trailblazer, NASA’s mission to understand lunar water and the Moon’s water cycle led by Caltech in Pasadena, California, is one step closer to launching next year. Earlier this month, the agency’s Jet Propulsion Laboratory in Southern California delivered a key science instrument to Lockheed Martin Space in Colorado, and the teams integrated it with the small satellite, or SmallSat.

The instrument, called the High-resolution Volatiles and Minerals Moon Mapper (HVM3), is one of two on Lunar Trailblazer. HVM3 will detect and map water on the Moon’s surface to determine its abundance, location, form, and how it changes over time. This information will provide data on the lunar water cycle and help inform future human missions as to where supplies of water may be found and extracted as a resource.

“The calibration and integration of HVM3 is a major milestone, because after three years of hard work the team delivered our key science instrument. This is a very exciting time,” said Walton Williamson, systems engineer at JPL and the HVM3 instrument manager.

The other instrument, the Lunar Thermal Mapper infrared multispectral imager, is being developed by the University of Oxford in the U.K. and is scheduled for delivery and integration in early 2023.

Selected under NASA’s Small Innovative Missions for Planetary Exploration (SIMPLEx) program in 2019, Lunar Trailblazer measures only 11.5 feet (3.5 meters) wide with its solar panels fully deployed, but this a compact spacecraft with far-reaching goals.

While past observations have confirmed that the Moon has water on its surface, little is known about its distribution or form. HVM3, an imaging spectrometer, will fill this knowledge gap by mapping the spectral fingerprints – or wavelengths of reflected sunlight – of the different forms of water over the lunar landscape to make high-resolution maps.

For instance, water molecules could be locked inside lunar rock and regolith – broken rock and dust – and they may settle for short periods as frost in cold shadows. As the Sun moves across the sky during the lunar day, the shadows move, too, cycling these water molecules into the Moon’s exosphere and transporting them to other cold places where they can settle once more as a frost. The most likely locations to hold water ice in significant quantities are permanently shadowed craters at the lunar poles, which are key targets for science and exploration.

To differentiate between these different forms of water, how they move, and where they are located, HVM3 has two key features that set it apart from other spectrometers. The first is its ability to detect a wide range of infrared wavelengths that are readily absorbed by different forms of water. The second is its sensitivity to those wavelengths: HVM3 is designed to be sensitive to low illumination levels, which will be critical to revealing water that may be found in the Moon’s darkest craters.

“Measuring the permanently shadowed regions of the lunar surface will be the most challenging part of the mission,” said David R. Thompson, senior research scientist at JPL and HVM3 instrument scientist. “To observe any ice on the floors of those craters that haven’t seen sunlight for eons, we’ll be using light scattered off neighboring solar-illuminated crater walls.”

Thompson likens this to a bank shot in basketball, when a player makes a shot that bounces from the backboard into the basket. Solar photons – the quantum particles of light – bounce, or scatter, off the sunlit slopes of the crater and are redirected into the permanently shadowed crater bottoms. This light can be over a thousand times dimmer than direct solar illumination, requiring exquisite instrument sensitivity.

Where HVM3 will look for water, Lunar Thermal Mapper will detail the temperature properties of the Moon’s surface. Together, they will provide scientists with a deeper knowledge of how surface temperature affects the distribution of water on the Moon.

“This mission was tailor-made to unlock the persisting mystery of the Moon’s water by mapping its distribution while also helping us understand if it’s locked within lunar material or covering the surface as ice in cold spots,” said Bethany Ehlmann, the Lunar Trailblazer principal investigator at Caltech. “I am immensely proud of the Trailblazer team for completing this important milestone of instrument delivery. Now we are focusing on the next phases as we approach launch.”

Lunar Trailblazer will launch as a secondary payload on the second lunar lander mission by Intuitive Machines, called IM-2. That launch, which will also carry NASA’s Polar Resources Ice Mining Experiment-1 subsurface ice drill, is scheduled for no earlier than mid-2023.

The mission is managed by JPL and its science investigation is led by Caltech. Managed for NASA by Caltech, JPL also provides system engineering, mission assurance, the HVM3 instrument, as well as navigation. Lockheed Martin Space provides the spacecraft and integrates the flight system, under contract with Caltech.