A team of astrophysicists has created a simulated image that shows how the Nancy Grace Roman Space Telescope could conduct a mega-exposure similar to but far larger than Hubble’s celebrated Ultra Deep Field Image. This Hubble observation transformed our view of the early universe, revealing galaxies that formed just a few hundred million years after the big bang.

“Roman has the unique ability to image very large areas of the sky, which allows us to see the environments around galaxies in the early universe,” said Nicole Drakos, a postdoctoral scholar at the University of California Santa Cruz, who led the study. “Our study helps demonstrate what a Roman ultra-deep field could tell us about the universe, while providing a tool for the scientific community to extract the most value from such a program.”

By capturing the Hubble Ultra Deep Field image, astronomers pulled aside the cosmic curtains to reveal that a tiny, seemingly empty slice of the sky was actually teeming with thousands of galaxies, each containing billions of stars. The Hubble team harnessed the power of a long exposure time – hundreds of hours between 2002 and 2012 – which allowed the telescope to collect more light than it could in a single, short observation. The resulting image helped us see more than 13 billion years back in time.

Hubble’s Ultra Deep Field offers an incredible window to the early universe, but an extremely narrow one, covering less than one ten millionth of the whole sky. The new simulation showcases Roman’s power to perform a similar observation on a much larger scale, revealing millions of galaxies instead of thousands. While a Roman ultra-deep field would be just as sharp as Hubble’s and peer equally far back in time, it could reveal an area 300 times larger, offering a much broader view of cosmic ecosystems. 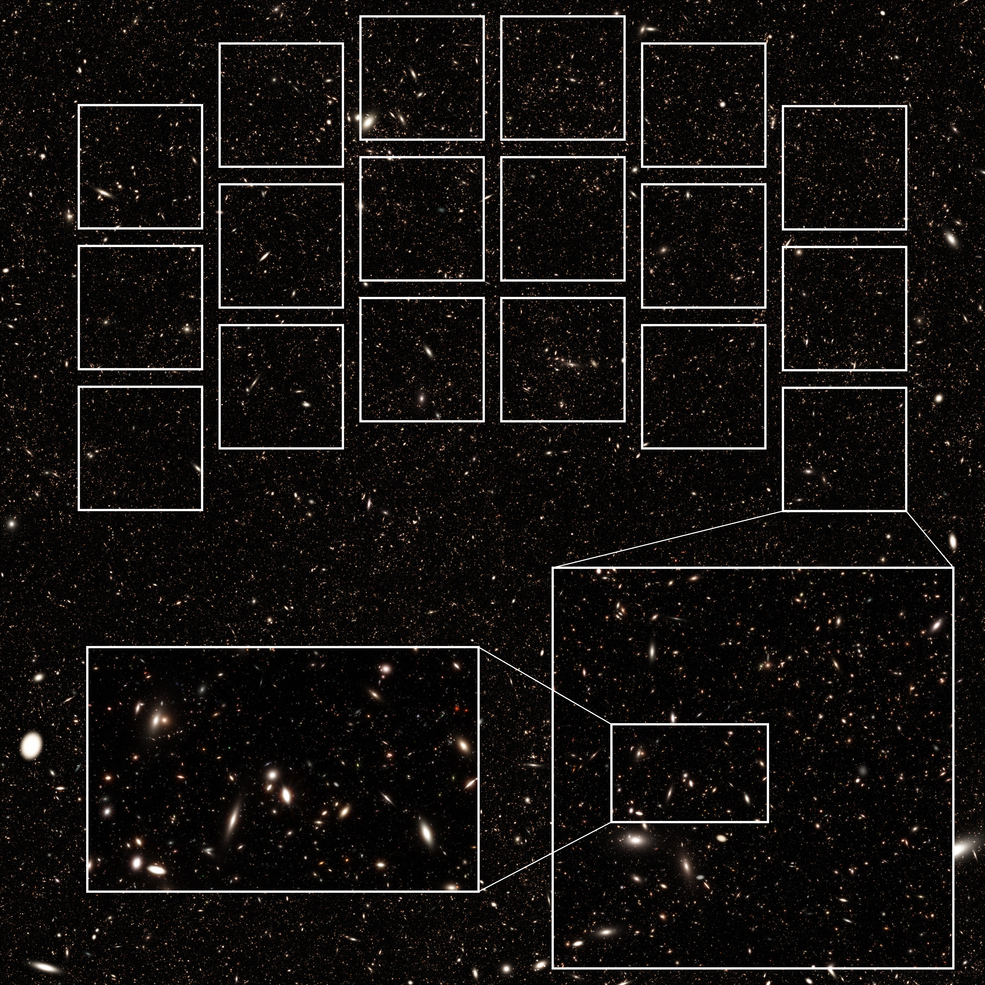 This synthetic image visualizes what a Roman ultra-deep field could look like. The 18 squares at the top of this image outline the area Roman can see in a single observation, known as its footprint. The inset at the lower-right zooms into one of the squares of Roman's footprint, and the inset at the lower-left zooms in even further. The image, which contains more than 10 million galaxies, was constructed from a simulation that produced a realistic distribution of the galaxies in the universe. Roman could peer across more than 13 billion years of cosmic history, reaching back to when the universe was only about half a billion years old. Such distant galaxies are extremely faint, so Roman would have to stare at one spot in space for several days to collect enough light from them. The mission’s wide field of view will provide an incredible amount of data, helping astronomers find rare objects in the epoch of reionization. The large area Roman will observe will also show differences in galaxy properties based on their surrounding environment, allowing astronomers to better understand how early galaxies formed.
Credits: Nicole Drakos, Bruno Villasenor, Brant Robertson, Ryan Hausen, Mark Dickinson, Henry Ferguson, Steven Furlanetto, Jenny Greene, Piero Madau, Alice Shapley, Daniel Stark, Risa Wechsler
Download high-resolution video and images from NASA’s Scientific Visualization Studio

“The Hubble Ultra Deep Field gave us a glimpse of the universe’s youth, but it was too small to reveal much information about what the cosmos was really like back then as a whole,” said Brant Robertson, an astronomy professor at the University of California Santa Cruz and a co-author of the study. “It’s like looking at a single piece of a 10,000-piece puzzle. Roman could give us 100 connected puzzle pieces, offering a much better picture of what the early universe was like and opening up new scientific opportunities.”

To generate their simulated Roman ultra-deep field image, Drakos and co-authors created a synthetic catalog of galaxies, complete with detailed information about each one. By doing so, the team essentially created a mock universe, basing their synthetic galaxies on dark matter simulations and observation-based models. They made the galaxy catalog publicly available so other scientists can use it to prepare for future Roman observations. The team also created an interactive website where users can zoom and pan across the full-resolution image.

The team’s results will be published in The Astrophysical Journal.

Astronomers usually have to choose between taking a shallow, wide-area image and capturing a very sensitive, deep image since telescope time is a precious commodity. But with Roman’s enormous field of view and infrared vision, they will be able to peer far and wide simultaneously, opening up new avenues of cosmic exploration.

This video demonstrates how Roman could expand on Hubble’s iconic Ultra Deep Field image. While a similar Roman observation would be just as sharp as Hubble’s and see equally far back in time, it could reveal an area 300 times larger, offering a much broader view of cosmic ecosystems.
Credits: NASA's Goddard Space Flight Center/CI Labs
Download high-resolution video and images from NASA’s Scientific Visualization Studio

Drakos and co-authors show that a Roman ultra-deep field program could reveal more than a million galaxies scattered throughout cosmic history, from very young and small galaxies just beginning to form stars to the modern era, which features many massive, often relatively inactive galaxies. Scientists would be able to probe how galaxies transition from forming lots of new stars to this quieter stage, when star formation is complete.

The possible causes of this metamorphosis are currently poorly understood, but Roman’s wide viewing power could offer clues about how a galaxy’s environment, such as its location in relation to other galaxies or galaxy clusters, affects its star formation.

Galaxies in which star formation has ended, known as quiescent galaxies, are increasingly difficult to find the farther back in time astronomers look.

“We’re not sure whether we haven’t detected very distant quiescent galaxies because they don’t exist, or simply because they’re so difficult to find,” Drakos said.

Drakos and co-authors showed that Roman’s ability to image large patches of the distant universe and reveal both rare and faint objects could help astronomers find as many as 100,000 quiescent galaxies, likely including some of the farthest ones ever discovered. Astronomers could also use Roman ultra-deep field observations to determine whether galaxies transition from star-forming to quiescent differently in different cosmic eras.

The end of the cosmic “dark ages”

The team’s work shows that Roman could illuminate our understanding of a long-ago cosmic event called reionization. Shortly after the big bang, the universe was filled with a hot sea of plasma – charged particles – that formed a dense, ionized fluid. As the universe cooled, the particles were able to stick together to form hydrogen atoms, which resulted in a neutral hydrogen fog. This marked an era called the cosmic “dark ages” since this fog prevented shorter wavelengths of light, which may have been emitted from young, forming galaxies or quasars from traveling very far.

But then the neutral hydrogen atoms broke apart, returning to charged particles in an epoch of reionization. The fog lifted, transforming the universe from being mostly opaque to the brilliant starscape we see today. Findings from NASA’s Spitzer Space Telescope hint that the first galaxies released extremely high amounts of ionizing radiation – ultraviolet light, X-rays, and gamma rays – which could have disrupted the hydrogen fog. 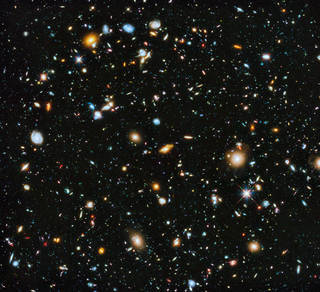 Hubble’s Ultra Deep Field image, first unveiled in 2004 with additional observations in subsequent years, revealed thousands of galaxies stretching back to within a few hundred million years of the big bang. Roman could perform a similar observation on a much larger scale, revealing millions of galaxies instead of thousands. A Roman ultra-deep field would offer a detailed view of the environments surrounding galaxies in different stages of development, providing clues about how they evolve.
Credits: NASA, ESA, H. Teplitz and M. Rafelski (IPAC/Caltech), A. Koekemoer (STScI), R. Windhorst (Arizona State University), and Z. Levay (STScI)

A Roman ultra-deep field program could advance our understanding of the epoch of reionization by revealing wide images containing more than 10,000 galaxies from this relatively brief cosmic age, which happened sometime between when the universe was around 600 million to 900 million years old, and a detailed view of the environments around these galaxies. This could help scientists understand what caused reionization, when exactly it happened, and whether its occurrence was uniform or patchy.

Roman also has the power to reveal how galaxies and galaxy clusters – which form some of the largest structures in the universe – evolved over time. Scientists think galaxies were born within vast spherical clumps of dark matter called halos. Observations indicate that each galaxy’s luminosity, or absolute brightness, is linked to the mass of the dark matter halo it resides in. By creating an ultra-deep field image, Roman could help astronomers better understand this connection. This has implications for not only galaxy formation but also the standard cosmological model – the theoretical model of how the universe evolves – which includes a dark matter clumping parameter.

“Roman could shine a light on so many cosmic mysteries in just a few hundred hours of observing time,” said Bruno Villasenor, a graduate student at the University of California Santa Cruz and a co-author of the study. “It’s amazing to think that no one knew for sure whether other galaxies existed until about a hundred years ago. Now, Roman offers us the opportunity to observe thousands of the first galaxies that appeared in the very early universe!”