One of the Hubble Space Telescope’s most iconic images is the Hubble Ultra Deep Field, which unveiled myriad galaxies across the universe, stretching back to within a few hundred million years of the Big Bang. Hubble peered at a single patch of seemingly empty sky for hundreds of hours beginning in September 2003, and astronomers first unveiled this galaxy tapestry in 2004, with more observations in subsequent years.

NASA’s upcoming Nancy Grace Roman Space Telescope will be able to photograph an area of the sky at least 100 times larger than Hubble with the same crisp sharpness. Among the many observations that will be enabled by this wide view of the cosmos, astronomers are considering the possibility and scientific potential of a Roman Space Telescope “ultra-deep field.” Such an observation could reveal new insights into subjects ranging from star formation during the universe’s youth to the way galaxies cluster together in space.

Roman will enable new science in all areas of astrophysics, from the solar system to the edge of the observable universe. Much of Roman’s observing time will be dedicated to surveys over wide swaths of the sky. However, some observing time will also be available for the general astronomical community to request other projects. A Roman ultra deep field could greatly benefit the scientific community, say astronomers.

“As a community science concept, there could be exciting science returns from ultra-deep field observations by Roman. We would like to engage the astronomical community to think about ways in which they could take advantage of Roman’s capabilities,” said Anton Koekemoer of the Space Telescope Science Institute in Baltimore, Maryland. Koekemoer presented the Roman ultra-deep field idea at the 237th meeting of the American Astronomical Society, on behalf of a group of astronomers spanning more than 30 institutions.

As an example, a Roman ultra-deep field could be similar to the Hubble Ultra Deep Field – looking in a single direction for a few hundred hours to build up an extremely detailed image of very faint, distant objects. Yet while Hubble snagged thousands of galaxies this way, Roman would collect millions. As a result, it would enable new science and vastly improve our understanding of the universe. 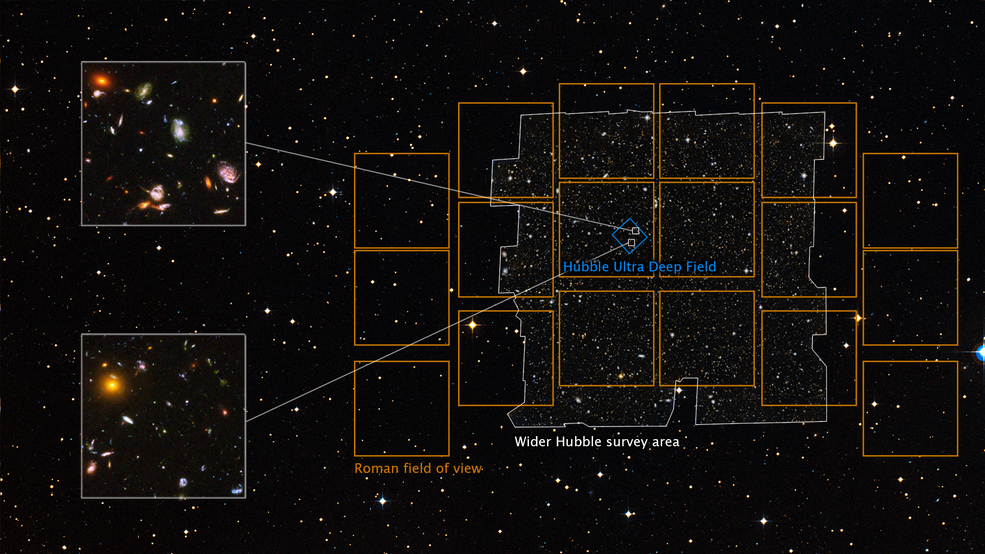 This composite image illustrates the possibility of a Roman Space Telescope “ultra deep field” observation. In a deep field, astronomers collect light from a patch of sky for an extended period of time to reveal the faintest and most distant objects. This view centers on the Hubble Ultra Deep Field (outlined in blue), which represents the deepest portrait of the universe ever achieved by humankind, at visible, ultraviolet and near-infrared wavelengths. Two insets reveal stunning details of the galaxies within the field. Beyond the Hubble Ultra Deep Field, additional observations obtained over the past two decades have filled in the surrounding space. These wider Hubble observations reveal over 265,000 galaxies, but are much shallower than the Hubble Ultra Deep Field in terms of the most distant galaxies observed. These Hubble images are overlaid on an even wider view using ground-based data from the Digitized Sky Survey. An orange outline shows the field of view of NASA’s upcoming Nancy Grace Roman Space Telescope. Roman’s 18 detectors will be able to observe an area of sky at least 100 times larger than the Hubble Ultra Deep Field at one time, with the same crisp sharpness as Hubble. Credits: NASA, ESA, and A. Koekemoer (STScI); Acknowledgement: Digitized Sky Survey

Structure and history of the universe

Perhaps most exciting is the possibility of studying the very early universe, which corresponds to the most distant galaxies. Those galaxies are also the rarest: for example, only a handful are seen in the Hubble Ultra Deep Field.

Thanks to Roman’s wide field of view and near-infrared data of similar quality to Hubble’s, it could discover many hundreds, or possibly thousands, of these youngest, most distant galaxies, interspersed among the millions of other galaxies. That would let astronomers measure how they group together in space as well as their ages and how their stars have formed.

“Roman would also yield powerful synergies with current and future telescopes on the ground and in space, including NASA’s James Webb Space Telescope and others,” said Koekemoer.

Moving forward in cosmic time, Roman would pick up additional galaxies that existed about 800 million to 1 billion years after the big bang. At that time, galaxies were just beginning to group together into clusters under the influence of dark matter. While researchers have simulated this process of forming large-scale structures, a Roman ultra-deep field would provide real world examples to test those simulations.

In 2003, Hubble captured its iconic Ultra Deep Field image, which changed our understanding of the universe. With 100 times more coverage, imagine what we could learn if the Nancy Grace Roman Space Telescope did the same.
Credits: NASA's Goddard Space Flight Center
Download high-resolution video and images from NASA’s Scientific Visualization Studio

The early universe also experienced a firestorm of star formation. Stars were being born at rates hundreds of times faster than what we see today. In particular, astronomers are eager to study “cosmic dawn” and “cosmic noon,” which together cover a time 500 million to 3 billion years after the big bang when most star formation was happening, as well as when supermassive black holes were most active.

“Because Roman’s field of view is so large, it will be game changing. We would be able to sample not just one environment in a narrow field of view, but instead a variety of environments captured by Roman’s wide-eyed view. This will give us a better sense of where and when star formation was happening,” explained Sangeeta Malhotra of NASA Goddard Space Flight Center in Greenbelt, Maryland. Malhotra is a co-investigator on the Roman science investigation teams working on cosmic dawn, and has led programs that do deep spectroscopy with Hubble, to learn about distant, young galaxies.

Astronomers are eager to measure star formation rates in this distant epoch, which could influence a variety of factors such as the amount of heavy elements observed. Rates of star formation might depend on whether or not a galaxy lies within a large cluster. Roman will be capable of taking faint spectra that will show distinct “fingerprints” of these elements, and give accurate distances (called redshifts) of galaxies.

“Population experts might ask, what differences are there between people who live in big cities, versus those in suburbia, or rural areas? Similarly, as astronomers we can ask, do the most active star forming galaxies live in very clustered regions, or just at the edges of clusters, or do they live in isolation?” Malhotra said.

Big data and machine learning
One of the greatest challenges of the Roman mission will be learning how to analyze the abundance of scientific information in the public datasets that it will produce. In a sense, Roman will create new opportunities not only in terms of sky coverage, but also in data mining.

A Roman ultra-deep field would contain information on millions of galaxies – far too many to be studied by researchers one at a time. Machine learning – a form of artificial intelligence – will be needed to process the massive database. While this is a challenge, it also offers an opportunity. “You could explore completely new questions that you couldn’t previously address,” stated Koekemoer.

“The discovery potential enabled by the huge datasets from the Roman mission could lead to breakthroughs in our understanding of the universe, beyond what we might currently envision,” Koekemoer added. “That could be Roman’s lasting legacy for the scientific community: not only in answering the science questions we think we can address, but also new questions that we have yet to think of.”