A team of scientists found NASA's Nancy Grace Roman Space Telescope will be able to measure a specific kind of space dust littered throughout dozens of nearby planetary systems’ habitable zones, or the regions around stars where temperatures are mild enough that liquid water could pool on worlds’ surfaces. Finding out how much of this material these systems contain would help astronomers learn more about how rocky planets form and guide the search for habitable worlds by future missions. 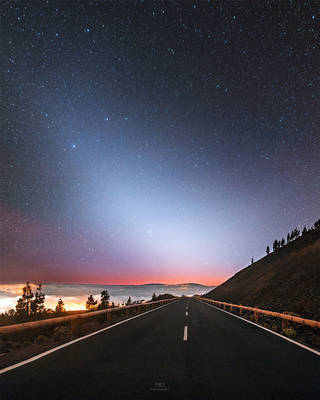 The bright haze in the sky in this photo comes from zodiacal dust, tiny bits of debris produced mainly by asteroids and comets. This dust scatters sunlight so effectively that, seen from afar, it’s the second brightest thing in our solar system after only the Sun. Exozodiacal dust – the same kind of debris in other planetary systems – proves an interesting target of study, but also presents a significant barrier for finding exoplanets. Roman will measure exozodiacal dust to guide future planet-hunting endeavors and learn about planet formation. Credits: Ruslan Merzlyakov/astrorms, used with permission

In our own solar system, zodiacal dust – small rocky grains largely left behind by colliding asteroids and crumbling comets – spans from near the Sun to the asteroid belt between Mars and Jupiter. Seen from a distance, it’s the brightest thing in the solar system after the Sun. In other planetary systems it’s called exozodiacal dust and creates a haze that obscures our view of planets because it scatters light from the host star.

“If we don’t find much of this dust around a particular star, that means future missions will be able to see potential planets relatively easily,” said Ewan Douglas, an assistant professor of astronomy at the University of Arizona in Tucson and the lead author of a paper describing the results. “But if we do find this kind of dust, we can study it and learn all kinds of interesting things about its sources, like comets and asteroids in these systems, and the influence of unseen planets on its brightness and distribution. It’s a win-win for science!”

Searching for exozodiacal dust is just one example of the promising potential scientific uses from Roman’s Coronagraph Instrument that could follow its 18-month technology demonstration phase. The team’s results are published in the Publications of the Astronomical Society of the Pacific.

By studying exozodiacal dust, astronomers can find clues to what other planetary systems are like. The amount of debris hints at comet activity, since a greater number of comets should produce more dust. Seeing the dust’s distribution pattern could offer hints about orbiting planets, which could sculpt the debris with their gravity and carve paths through the material.

This animation zooms out from our solar system and shows how the sunlight scattered by zodiacal dust is brighter than the planets when viewed from afar. The same kind of dust in other planetary systems, called exozodiacal dust, creates a similar haze that makes it challenging to detect orbiting worlds. Credits: NASA's Goddard Space Flight Center

“No one knows much about exozodiacal dust because it’s so close to its host star that it’s usually lost in the glare, making it notoriously difficult to observe,” said Bertrand Mennesson, Roman's deputy project scientist at NASA’s Jet Propulsion Laboratory in Southern California and a co-author of the paper. “We’re not sure what Roman will find in these other planetary systems, but we’re excited to finally have an observatory that’s equipped to explore this aspect of their habitable zones.”

Roman could use its Coronagraph Instrument to block out a host star’s light and make sensitive measurements of the light reflected by the system’s dust in the same kind of light our eyes can see. Ground-based telescopes struggle with such observations because they must look through Earth’s turbulent atmosphere. “It’s very hard to block a twinkling star,” Douglas said.

“The Roman Coronagraph is equipped with special sensors and deformable mirrors that will actively measure and subtract starlight in real time,” said John Debes, an astronomer at the Space Telescope Science Institute in Baltimore and a co-author of the paper. “This will help provide a very high level of contrast, a hundred times better than Hubble’s passive coronagraph offers, which we need to spot warm dust that orbits close to the host star.”

A Pathfinder for Future Missions

While other observatories, such as the Hubble Space Telescope, have observed cold debris disks far from their host stars – farther from their stars than Neptune is from the Sun – no one has been able to photograph warm dust in the habitable zone region. While previous NASA projects have made preliminary measurements of exozodiacal dust in habitable zones, Roman’s images will be much more sensitive, thanks to its advanced high-contrast Coronagraph Instrument and its stable location in space. Orbiting a million miles from Earth around the Lagrange Point 2 (L2), instead of in low-Earth orbit like Hubble, means our planet won’t present such a challenging environment from which to make these observations.

Imaging warm debris closer to host stars is important because it’s made up of different material than outer dust disks. Closer to the host star, rocky grains dominate the dust; farther away, it is largely composed of icy grains. The debris in each region is created by different processes, so studying the chemistry of exozodiacal dust offers information astronomers can’t get by observing the outer regions around other stars.

“By prospecting for this dust, we could learn about the processes that shape planetary systems while providing important information for future missions that aim to image habitable-zone planets,” Debes said. “By finding out how much exozodiacal dust is in the way of possible planets in nearby systems, we can tell how large future telescopes will need to be to see through it. Observations from the Roman Coronagraph could offer a crucial steppingstone in the search for Earth analogs.”

Banner: Illustration showing how zodiacal dust scatters sunlight, creating a glare that makes it difficult to see planets from afar.