A Tale of Two Telescopes: WFIRST and Hubble

NASA’s Wide Field Infrared Survey Telescope (WFIRST), planned for launch in the mid-2020s, will create enormous cosmic panoramas. Using them, astronomers will explore everything from our solar system to the edge of the observable universe, including planets throughout our galaxy and the nature of dark energy.

Though it’s often compared to the Hubble Space Telescope, which turns 30 years old this week, WFIRST will study the cosmos in a unique and complementary way.

“WFIRST will enable incredible scientific progress on a broad range of topics, from stellar populations and distant planets to dark energy and the structure of galaxies,” said Ken Carpenter, the WFIRST ground system project scientist and Hubble operations project scientist at NASA’s Goddard Space Flight Center in Greenbelt, Maryland. “Hubble contributed tremendously to our understanding in these areas, but WFIRST will propel us forward by studying far more objects in the sky.”

Thirty years after its launch, Hubble continues to provide us with stunning, detailed images of the universe. When WFIRST opens its eyes to the cosmos, it will generate much larger images while matching Hubble’s crisp infrared resolution. 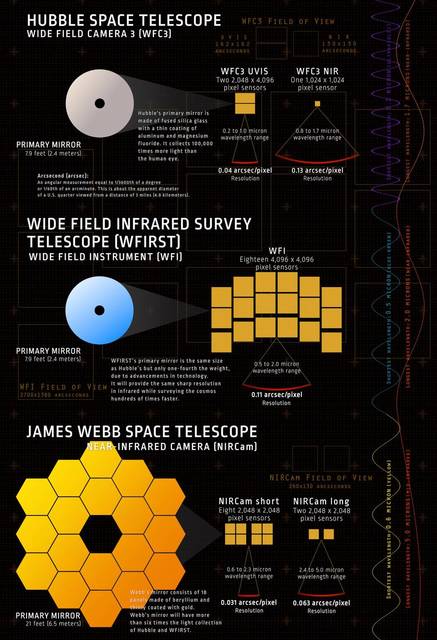 Hubble adds to our picture of the universe in ways WFIRST can’t by using ultraviolet vision that captures the high-resolution details, and by providing more specialized features for in-depth study of the light emitted by individual objects. WFIRST provides a more general capability in covering wide areas at visible and infrared wavelengths.

Each WFIRST image will capture a patch of the sky bigger than the apparent size of a full Moon. Hubble’s widest exposures, taken with its Advanced Camera for Surveys, are nearly 100 times smaller. Over the first five years of observations, WFIRST will image over 50 times as much sky as Hubble has covered so far in 30 years.​

Since the quality will be the same, WFIRST will function like a fleet of 100 Hubbles operating in sync. Its large field of view will enable WFIRST to conduct sweeping cosmic surveys that would take hundreds of years using Hubble. Scientists will use these surveys to study some of the most compelling mysteries in the universe, including dark energy — a strange force that is accelerating the expansion of the universe.

Hubble played a major role in discovering dark energy. In 1998, astronomers measured how fast the universe is expanding by using ground-based telescopes to study relatively nearby exploding stars, called supernovae. They made the surprising discovery that the expansion of the universe is speeding up. Astronomers using Hubble confirmed this result by measuring supernovae over a longer period of time. The data demonstrated that while the expansion of the universe was slowing down as expected over most of cosmic history, it began speeding up a few billion years ago.

Scientists have since determined that whatever is causing this acceleration currently makes up about 68% of the total matter and energy in the universe, but so far we don’t know much more about it. Uncovering the nature and role of dark energy will be one of WFIRST’s primary goals. Scientists will use three surveys to examine the dark energy puzzle from different angles, including a survey of one key type of supernova, building on the observations that led to dark energy’s discovery. The mission’s two large area surveys will measure the shapes of hundreds of millions of galaxies and find the distances to tens of millions. This will turn WFIRST’s wide-field images into 3D maps that measure the expansion of the universe and the growth of galaxies within it.

WFIRST will help us understand how dark energy has affected the expansion of the universe in the past, which will shed light on how it may influence the future of the cosmos.

A new set of eyes on the universe

While Hubble views the cosmos in infrared, visible and ultraviolet light, WFIRST will be tuned to see a slightly wider range of infrared light than Hubble can observe. Detecting more of the spectrum of light allows Hubble to create a more comprehensive picture of many processes at work in individual objects in the cosmos. WFIRST is designed to expand on Hubble’s infrared observations specifically, because conducting enormous surveys of the infrared universe will let us see vast numbers of cosmic objects and subtler processes in regions of space that would otherwise be difficult or impossible to view.

WFIRST will help unravel mysteries surrounding dark energy and the evolution of galaxies by peering across enormous stretches of the universe — even farther than Hubble is capable of seeing. These studies require precise infrared observations because light shifts into longer wavelengths, from ultraviolet and visible into infrared, as it travels across vast astronomical distances due to the expansion of space.

WFIRST’s infrared capabilities will also provide a new view into objects that are closer to home. The heart of our Milky Way galaxy is densely populated with rich targets, but shrouded in dust that obscures visible light. As an infrared telescope, WFIRST will essentially use heat-vision goggles to peer right through the dust, giving us a new view into the inner workings of the galaxy.

These observations will allow astronomers to study stellar evolution — the births, lives and deaths of stars. WFIRST will also expand our inventory of exoplanets — planets outside our solar system — by revealing thousands of worlds that astronomers expect will be very different from most of the 4,100 now known. Most of the currently known exoplanets are either very close to their host stars, or large planets orbiting farther away. Hubble has observed some of these planets directly using coronagraphs, which block the glare from stars. WFIRST will build upon that technology to make an active coronagraph that is much better at suppressing starlight — a demonstration of technology that, when further advanced, will enable future space telescopes to image Earth-size exoplanets.

Homing in on cosmic rarities

Scientists will also use WFIRST’s cosmic surveys to obtain enormous samples of some of the most extreme objects in the universe, including quasars — active galaxies with super-bright centers. Pinpointing their locations will allow Hubble and other telescopes to follow up for detailed observations. These investigations will enable astronomers to piece together the history of galaxy growth and the evolution of the universe.

To make these studies possible, WFIRST will operate much farther away from Earth than Hubble does. While Hubble orbits about 340 miles above us, WFIRST will be located about 930,000 miles (1.5 million km) away from Earth in the direction opposite the Sun. At this special place in space, called the second Sun-Earth Lagrange point, or L2, gravitational forces from the Sun and Earth balance to keep spacecraft in relatively stable orbits.

Near L2, WFIRST will orbit the Sun in sync with Earth, using a sunshield to block sunlight and keep the spacecraft cool. Since infrared light is heat radiation, if WFIRST is warmed by radiation from Earth, the Sun or even its own instruments, it will overwhelm the infrared sensors. From this vantage point, WFIRST can view large swaths of sky smoothly over long periods of time. 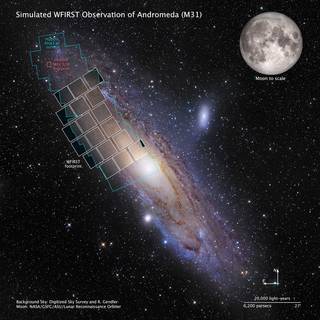 This image, comparing the apparent sizes of the Andromeda galaxy and the Moon in the sky, demonstrates the type of observation WFIRST will produce. It took Hubble more than 650 hours between 2010 and 2013 to produce the portion of the image outlined in teal, but calculations suggest WFIRST could observe the same area in three hours or less. WFIRST’s infrared observations will also allow us to see through obscuring dust to help us gain further insights into the natures of planets, stars and galaxies. Credits: Background image: Digitized Sky Survey and R. Gendler; Moon image: NASA, GSFC and Arizona State University; WFIRST simulation: NASA, STScI and B. F. Williams (University of Washington)

To collect as much light as possible, telescopes need large primary mirrors. Since both WFIRST and Hubble have a primary mirror that is 2.4 meters (7.9 feet) across, they gather the same amount of light. While the same size, WFIRST’s mirror is only one-fourth the weight of Hubble’s thanks to advancements in technology.
With Hubble’s similar light collection, resolution and an overlap in infrared capabilities, it can help set expectations for WFIRST. For example, Hubble produced a panoramic image of our neighboring Andromeda galaxy as part of the Panchromatic Hubble Andromeda Treasury (PHAT) program. Scientists compiled the PHAT image from 7,398 exposures taken over the course of three years. WFIRST could replicate Hubble’s PHAT image more than 1,000 times faster. This type of observation will reveal how stars change with time and influence the galaxy in which they reside.
Like Hubble, WFIRST will also offer a General Observer program to support the astronomical community, allowing scientists to take advantage of the mission’s unique capabilities by proposing new, competitively selected observations. As with Hubble, the pursuit of investigations not even contemplated before launch will likely become the primary legacy of the WFIRST mission. The entire trove of WFIRST data will be publicly available within days of being taken — a first for a NASA astrophysics flagship mission. WFIRST will have a robust archival research program to allow scientists to take full advantage of these vast datasets.
WFIRST benefits from an additional 30 years of major technological advances, however Hubble will continue to transform our understanding of the universe. In the coming years, WFIRST’s enormous infrared surveys will reveal interesting targets for follow up by other missions. Hubble can view the targets in additional wavelengths of light and will provide the only high-resolution view of the ultraviolet universe. The James Webb Space Telescope can make detailed observations that go even further into the infrared with its high-resolution, zoomed in view. Combining the WFIRST’s findings with Hubble’s and Webb’s could revolutionize our understanding in a multitude of cosmic pursuits.
“WFIRST’s surveys don’t require that we know exactly where and when to look to make exciting discoveries — we won’t be limited to looking under the cosmic lamppost,” said Goddard’s Julie McEnery, the WFIRST deputy project scientist. “The mission will turn on the floodlights so we can explore the universe in a whole new way.”

WFIRST is managed at Goddard, with participation by NASA's Jet Propulsion Laboratory and Caltech/IPAC in Pasadena, the Space Telescope Science Institute in Baltimore, and a science team comprising scientists from research institutions across the United States.